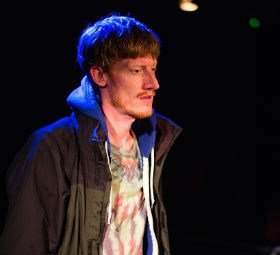 The hour long play, written by Nathan Lucky Wood, centers around Mark, James Thackeray, as he is chatting to his online friend Ghost, Jake Curran, on Halloween. Mark’s dad is away and his mum Anna, Beatrice Curnew, has work commitments so he is home alone. Ghost is desperate to meet Mark, who is a sexually confused 15-year-old intrigued with what a man would be like. But is that Ghost’s intention? He knows more than an online friend should know about someone, is there something more sinister on the cards….?

On entering you are greeted by the set stage, a single small table, chair and a laptop. It is a small theatre with the stage nearly being a round, there is one side that doesn’t have chairs for the audience. A lovely welcoming and intimate venue though.

Throughout the lighting is clever. The sections of the stage that have something happening are lit putting anyone else who may be on stage in darkness. It is impressive they can achieve this contrast due to the lack of space available to them.

Thackeray is superb as Mark. His character portrayal is flawless, believable and worryingly accurate in the scene where he has just taken some pills. My companion for this play was an A&E Sister who has seen her fair share of “high” people and she commented on just how good Thackeray was.

Curran’s depiction of a somewhat sinister Ghost of the internet is excellent. There are some sections of the online conversation that just become weird as the plot unravels and more information is made available. Curran shows us a caring character but there is an undercurrent of crazy that seeps out but never to the point where it is the main focus. The subtlety with which Curran manages this is to be commended.

Curnew is great as Anna. The script does lack substance for Anna to start with but this picks up through the play and Curnew manages to deliver a great portrayal of a confused mum who isn’t sure if she should be with her husband but wants what’s best for her son.

If you get the chance to see this play it is well worth it, superbly written, well directed by Jennifer Davis and acted brilliantly – go along if you can.

“You should be careful, Mark. There are some really dangerous people out there.”

It’s Halloween, but Mark’s not going out. While his mum buries herself in work, he’s staying in, playing Xbox, and talking to Ghost. He doesn’t know his real name. He likes that it’s anonymous. It feels like they can be honest with each other. But Ghost knows more than he should ­and he really, really wants to meet…

Written by Nathan Lucky Wood and directed by Jennifer Davis, graduate of the King’s Head Trainee Resident Director Scheme, A Haunting is a dark contemporary horror story about the internet, intrusion, and what we try to censor of our own past.