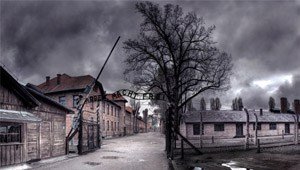 As you enter the intimate Studio space at the Churchill Theatre in Bromley, you see on stage what at first looks like a mannequin dressed in the striped pyjama uniform complete with yellow star, of an inmate of Auschwitz concentration camp. On taking your seat, you realise that this is no mannequin but an actor taking part in A Lesson From Auschwitz. Tiny swaying movements have given the game away and as you wait for the play to begin you realise that he has a bloody nose and looks in a terrible state.

The lights then go down and on marches a high ranking German officer who introduces himself as SS-Obersturmbannführer Rudolph Höss, commandant of Auschwitz. He then talks to the audience as if we were German soldiers brought into run the camp and as he says with great glee, he wants to look them in the eye and see if they have what it takes to “exterminate Jews”. He then proceeds to explain what is going to happen in the camp and uses the man, a Jewish prisoner called Abraham Könisberg to demonstrate how these “vermin” should be treated, beating Könisberg half to death as he flogs him using each stroke of his cane as a bullet point as he addresses the soldiers explaining their duties in the camp. Höss then describes in great detail how the “Jewish question” is going to be addressed and almost salivates as he brings out the solution – Zyklon B gas.

If this sounds like a harrowing evening, to a certain extent it is. James Hyland who plays “Höss” (as well as writing, directing and producing the piece) is superb as the sadistic commandant whilst giving us glimpses of the madness of the man. He spits out venomous rhetoric about eradicating an entire race whilst a tiny smile plays around his lips. The part of Könisberg is a thankless one as he’s flogged heavily with a cane, made to stand with his arms in the air for quite some time and is finally beaten to the ground exhausted. Michael Shon is totally believable in the part and the audience suffers along with him as he tries to fight back, refusing to be cowed although he realises that he’s about to die.

There is a little twist at the end when we see a tiny sliver of humanity in Höss but it doesn’t last long and he’s soon off to organise the murder of untold numbers of men, women and children and the play ends in silence as the audience is unsure whether to applaud – which we do if only to reward the efforts of these two wonderful actors, whilst trying to digest the enormity of what went on unchecked in a small village in Poland all those years ago.

As the survivors of the Holocaust diminish in numbers, it’s important that plays like this are seen by as many people as possible especially in the current climate of overt racism that can be found in many parts of the world. In Poland high school students have to visit Auschwitz as part of the curriculum and whilst A Lesson From Auschwitz deserves a larger all-round audience, starting in high schools and colleges would be a start. For as George Santayana wrote “Those who do not learn from the past, are condemned to repeat it”.

In 1941, Rudolf Höss, Commandant of the Nazi concentration camp known as Auschwitz, assembled his SS personnel in a secret meeting with the express purpose of introducing a new method for exterminating Europe’s Jews: Zyklon B, a deadly poison gas. Every soldier in attendance was sworn to secrecy, and no one questioned its usage. No one except a lone Jewish prisoner, forced to participate and humiliated throughout; the very prisoner upon which this “lesson” would be demonstrated.

Based upon actual events, A Lesson from Auschwitz reveals how and why the Nazis did what they did, shedding light on the mentality of the perpetrators and the disturbing reality of life in a death camp.