Home » Reviews » A Midsummer Night’s Dream at the Actors’ Church

The Iris Theatre’s production of Shakespeare’s, A Midsummer Night’s Dream, is fun and energetic, setting out from its start to amuse, surprise and energise. With the use of familiar and well-loved pop music as well as a reimagined setting of a High School, complete with prom, to replace the original court of Athens, director, Sara Aniqah Malik, succeeds in making this play and its playwright accessible to all, no matter how young nor unfamiliar with Shakespeare or the play her audience might be. The first ten minutes or so of any Shakespeare production can be difficult for an audience to break into but with this production, all you will do is laugh. There are terrific jokes. 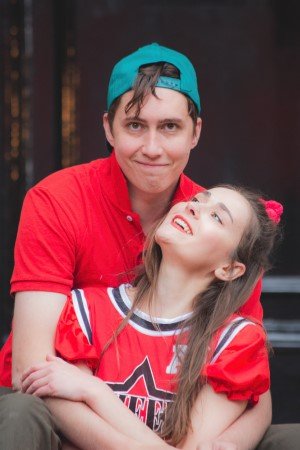 The action takes place mostly out of doors with seating set out in different areas of the rose and hollyhock-filled garden of St Paul’s Church which is located on the piazza in the centre of Covent Garden. The audience is invited to ‘promenade’ from location to location during the show as directed, which is a successful format, especially for those who might otherwise get restless. On a couple of occasions, scenes unfold inside the Church, also known as the Actors Church, in which there are many intriguing memorials to acting legends.

The entire cast is engaging. Stand outs include the talented Zena Carswell who, as an exasperated Helena amusingly suffering the indignities of unrequited love, has the facility of speaking Shakespeare’s verse and making it perfectly understandable to a contemporary audience. She does this in a way that is rare, not losing a single line of the beautiful poetry.

Also excellent is Ricky Oakley as Demetrius. He has immaculate comic timing and appealing and clever use of gesture and movement making his role relatable, contemporary and funny. He too is adept at communicating the meaning of Shakespeare’s verse. Mr Oakley was also able to conjure a spirit of poignancy as he described, to his bewilderment and despite all previous adventures, finding a love to last the rest of his life. Which is pretty amazing after all.

Freddy Elletson plays Lysander as a believably likeable figure which makes his effective depiction of the sort of pointed cruelty that can turn up when love goes wrong all the more shocking, some of the audience gasped at his words. Melissa Parker plays poor Hermia and also Titania, Queen of the Fairies, the latter as a stylish, confident figure who, when Puck’s spell is broken, gives a stirring speech about the standards she expects in love. Bottom played by Richard Holt is charmingly amusing throughout.

This is an enjoyable, light-hearted production to attend on a summer’s evening as well as being a suitably rumbustious introduction to Shakespeare or the play.

There’s a bar within the Church grounds to be enjoyed before the show as well as during the interval.

It’s Midsummer’s night and the young people of Athens Academy are getting ready for a party. Young Demetrius is about to be crowned prom king with his queen-to-be (he hopes) Hermia. Only problem is, she’s in love with someone else…

Fleeing her homecoming throne, Hermia escapes to the forest where new mysteries await her. A feuding fairy King and Queen plot revenge, a band of travelling misfits prepare for their latest performance whilst a magical trickster pursues mischief.

Expect enchantments, merriment, 90s throwbacks and love triangles aplenty in this hilarious romp through the gardens of the stunning Actors Church in Central London. Can love really to conquer all?

This show is not without clichés - there are three of note in this production. Firstly, the French horn of the show’s title is personified, speaking … END_OF_DOCUMENT_TOKEN_TO_BE_REPLACED

There’s very little in the way of set in this show: aside from chairs, a few crash barriers and at one point, a red carpet, the actors’ movements … END_OF_DOCUMENT_TOKEN_TO_BE_REPLACED

South African born, but raised on the Isle of Man, Pierre Novellie is a true raconteur rather than just another 'stand-up' comedian. He says about his … END_OF_DOCUMENT_TOKEN_TO_BE_REPLACED

This show, Willy Hudson began by saying, is about himself. It is written by himself, is directed by himself and executive produced by himself. Almost … END_OF_DOCUMENT_TOKEN_TO_BE_REPLACED

The rough and tumble of secondary school life is not a time I recall with fondness by any stretch of the imagination – at the time, if anyone said, in … END_OF_DOCUMENT_TOKEN_TO_BE_REPLACED