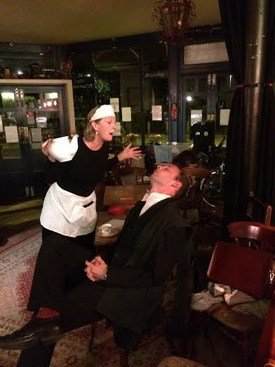 Yesterday evening my best friend and I dressed up in our best versions of 1930s fashion and academic dress and moseyed along to The Tea House Theatre in the Vauxhall Pleasure Gardens to watch Stern Alarum’s production of A Midsummer Night’s Dream.

The venue is a tea house in the day time and in the evenings they transform the space to put on theatre and performance art. Last night was no exception to the rule, as we arrived at the Tea House Theatre, dressed in cloche hats, marbled specs and furs we were welcomed to Athen’s college Tea Rooms and told to find a seat. Already the small cast of 7 were in role and talking to the audience as they arrived. Alexander Pankhurst, who played Bottom Demetrius (yes, Shakespeare Purist, 2 characters became 1) welcomed my friend and I and took our photograph as we sipped gin cocktails from a teapot – very prohibition.

The action started promptly at 8pm with the entrance of Professor Theseus, played by Andrew Shepherd. He began this evening’s lecture on the subject of Dream. For any of those who don’t know the play, this is a nice introduction of what we are going to be experiencing over the next hour. For those of us who know the play well (I have seen the production around five times and even played a part in a production when I was a student) we get a feeling that tonight’s production is going to be a special re-imagining of the Shakespeare classic love story of confused love, meddling from the faery world and storytelling from a group of mechanicals.

The production is just over 1 hour long and successfully delivers the true essence of the play with a lean cast of only seven. Again, purists may hate the way that character’s lines are reassigned and read out of context. I, however, found this truly marvellous and loved that I could hear Helena speak Titania’s words and Demetrius playing Bottom playing Pyramus was pure genius.

The piece is a fun, energetic production that inspires belly laughter throughout – the casting is brilliant and the team work together perfectly to produce a spectacular ensemble piece. Students from around the world are at Athens College; Demetrius (Alexander Pankhurst) is a classic Oxbridge Student with RP accent, Lysander (Garry Summers) is from the highlands, and his gentle Scottish tones work beautifully with Shakespeare’s iambic pentameter, Hermia (Kate Wyler) has an American accent and a coolness that disconnects her from the audience’s trust, whereas Helena (Angela Ferns) stole the show for me playing her character with gusto and wit as the slight British underdog – a geeky sex pot.

The piece is staged beautifully in front, around and on top of the audience, the action also takes place outside of the venue – and as audience members we get to watch some of the play’s best scenes through a window!

The on-stage relationship between Demetrius, Lysander and Helena is electric, it is very enjoyable to watch and all three of them have superb comic timing. Their fight scenes with cream cakes and umbrellas are beautifully choreographed and a pure joy for audience members. The image of Hermia throwing a cream cake at Helena and then Helena trying to be angry, whilst sensually licking the cake off of her face is priceless.

In line with the Tea House theme, instead of seeing a magical faery relationship between Puck and Oberon, we are instead presented with Mrs Puck, the Maid and Tea Maker who pours her magical blends in the eyes of the Athenians and enjoys mixing up their love interests. There is a beautiful scene where she is using her cleaning products to send the Athenian’s to sleep.

There is a great soundtrack, a mixture of songs from the 1930s era, some Beethoven and some silly sound effects.

The show is beautiful, funny and very clever. It is a shame it is only on for three nights. If you have a chance, get along tonight – or campaign for this theatre production to put on more shows.

1930s inspired reimagining of Shakespeare’s ‘A Midsummer Night’s Dream’. Join Professor Theseus’ Tea House Symposium for an evening of dress-up and distration at The Tea House Theatre, Vauxhall, followed by a post-show tea dance. Audience dress code: 1930s fashions. Cake and Cocktails available at The Tea House bar to get you into the 1930s mood.

It is September 1936 and the start of the new academic year at Athens College and Professor Theseus has decided to hold a teahouse symposium on A Midsummer Night’s Dream. The resident Tea Lady, Mrs Puck, keeps mixing up her tealeaves and table numbers, resulting in mix-ups and mischief. Elsewhere the chancellor is most concerned with the recent unchaperoned fraternising between the ladies and gentlemen’s colleges. As for the students: Quince is preoccupied with rehearsing the university revue; Lysander is cultivating his poetic soul; Hermia is plotting ways to escape her high society life; Demetrius is much distracted by the Tea House cocktails; and studious Helena is trying to discover her inner flapper.