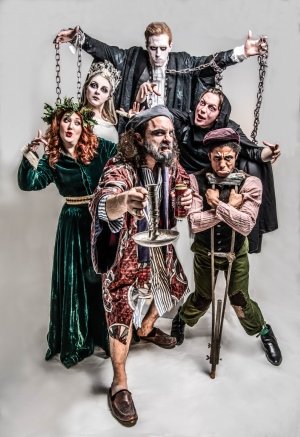 The old faithful A Christmas Carol from Mr Charles Dickens – just with a slight twist here and there. If you’re not familiar with the premise Shitfaced Showtime (previously Shitfaced Shakespeare) use here’s a quick run down; they trim down the play to an hour or so. These actors get in early and one of them drinks whilst the rest slowly watch their fellow thespian get progressively drunk. Once the show starts, the compere, the one and only Charles Dickens in this production, hands out a couple of attention seeking tools so two members of the audience can decide when the actor who’s drinking requires a top-up! Tonight there was a cracker and it wasn’t the most effective noise maker but that audience member got to shout “I’ve pulled a cracker” to help the compere. This can happen at any time and when it does the compere sounds a horn, the rest of the cast stop exactly where they are and the compere rushes on (if they’ve deemed it safe enough to leave the drunkard on stage without help!) and gives the drinking actor a fresh beverage. When the horn sounds again the play continues from where it was. Of course the drinking actor is rarely in the same position or following the script, not to mention progressively getting more drunk, so it is inevitable that mayhem ensues. Do you want to be the third audience member picked as guardian of the bucket, or the fourth who ends up on stage!?

I confess I have seen a couple of productions from the team before and thoroughly enjoy the concept and the productions they do. They don’t take the telling of the tale seriously so be aware of what you’re getting and don’t expect to understand the storyline afterwards if you’re not familiar! Nevertheless, they’re great, incredibly funny and well worth watching. You, understandably, get a different show each night and watching the sober actors react and deal with the situations as they arise is impressive. It is also impressive with how much the drinking actor actually seems to remember of, what you assume is, the original play.

I have no idea how drunk they get, I imagine that’s different for each actor. They do however rotate the drinking actor so that each ‘thesp’ never drinks on consecutive nights and no more than once a week; well not for the purposes of the play at any rate!

All performances were great, either delivering the actual lines or dealing with the mayhem caused by Quirke’s inebriation…! I imagine Brooke was ruing the day she agreed to be a pianist for some drunken singing. If you’re a traditionalist Dickens aficionado this probably isn’t for you but for everyone else it is a worthwhile hoot.

Not much else to say other than go and see this, or any other Shitfaced Showtime production they put on.

Combining cast members from Sh!t-faced Showtime and Sh!t-faced Shakespeare for the first time ever, A Pissedmas Carol is the all singing, all drinking alternative Christmas knees-up you never knew you wanted. Miserly Scrooge and his classic coterie of employees, relatives and ghosts travel through time having the night of his life – past, present and future. But will Scrooge be merry before the end? Or will it be the spirits that have had too many spirits? With one genuinely drunk cast member in every performance, A Pissedmas Carol is the ultimate “You’ll never guess what happened to me last night” story.

Already in a good mood because there is abundant free parking after 1.30pm on a Saturday (and all-day Sundays) near the venue, Little Angel Theatre’s … END_OF_DOCUMENT_TOKEN_TO_BE_REPLACED

There’s an air of familiarity for people who have been in the entertainment industry in this narrative. Global pandemic or not, supply always exceeds … END_OF_DOCUMENT_TOKEN_TO_BE_REPLACED

This was originally meant to be called West End Musical Christmas, and got postponed as the Government had no choice but to impose another lockdown - … END_OF_DOCUMENT_TOKEN_TO_BE_REPLACED

Sovereign Song by CrushRoom is an immersive theatre show in partnership with established venue COLAB, which leans heavily on an inspired premise for … END_OF_DOCUMENT_TOKEN_TO_BE_REPLACED