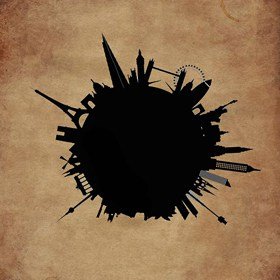 On entering a busker is playing the guitar and the remainder of the cast are sat on blocks whiling away the time reading or on their phone. The set is limited to the aforementioned blocks that double as seats and raised platforms but you barely notice the minimal set thanks to the excellent staging and direction by Alexandria Anfield. There is movement, singing, poetry, monkey impersonations, comedy and great acting all complemented by clever lighting drawing the focus to where it needs to be whilst leaving the rest of the cast lit but not intrusively so.

The outstanding performances for me were Holly Ashman playing Kate and Vinnie Monachello as Luke. Ashman just made anything she did on the stage seem effortless and a complete pleasure to watch. Monachello gave us a great character doing well in the business world but lacking some skill in the romantic department. Both Ashman and Monachello also delivered fantastic performances with the bit characters they played throughout, ensuring each were sufficiently different so there was no confusion as to which person we were watching at the time. Quite impressive really.

That isn’t to take anything away from the rest of the cast, Jessica Kearney – Bryony, Christina Hennessy Holmbek – Emelie, Elicia Moon Murphy – Chrissy and Oliver Healy – Busker gave great performances throughout and the whole cast were superb. The interactions on stage felt like they are a group of friends used to working together all the time – I have no idea if that’s actually the case or if the direction gave us this feeling of comfort and ease.

The one section that I thought could do with altering slightly is the poetry section that Healy has. At times it felt like the rhyming was there for the sake of it with words thrown in to ensure it rhymed. Yet at other times it flowed beautifully telling the story with ease. This section could have benefitted from being delivered in smaller segments dispersed throughout the play, that however is really nitpicking and someone who has a more favourable outlook on poetry could easily disagree with me.

I wasn’t sure if something depicting the troubles of a generation fast approaching 25 would resonate with me being very slightly, read much, older than that. Thankfully my companion for the evening is fast approaching 25, much more coincidence than by design, so she was my “gateway to the youth of today.” I didn’t have to worry though as Jenkins writing was easy to follow with humour, perception and a realism that gives an insight into what could easily be going through any 24 year old’s mind.

It is a really short run at The Union Theatre but if you get the chance it is well worth an evening out.

After sell out performances at The Camden Fringe 2015 and The Blue Elephant Theatre 2016, and before it appears at Edinburgh Fringe, Manchester Fringe and Upstairs at The Gatehouse London, A Working Title transfers for a short time only to The Union Theatre.

It’s about living in The City in a generation of renters, tinder swipers, never-left-the-nesters, budget shoppers, internshipers, over-the-recommended-daily-allowance-drinkers, minimum wage workers, sofa surfers and day dreamers. It’s about how disappointed your spotty sixteen-year-old self would be by their future dominated by Netflix, no money and sharing a shower with eight strangers.

It’s about turning 25 and still not having your sh*t together, accompanied by a jaunty live soundtrack, poetry, dancing and lots of silly voices.

A debut play for a generation who are making it up as they go along, A Working Title, by Megan Jenkins for theatre company, Original Impact, will be playing from 16th – 18th May at The Union Theatre, London. Recommended for ages 14+.