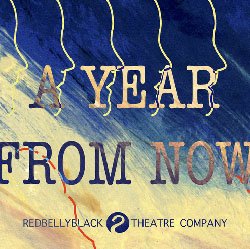 Our viewing diet has become so saturated with bamboozling and bombastic storylines it is often difficult to remember what good storytelling is about. Mega-million-dollar blockbusters treat us to outlandish superhero narratives, and West End smash-hits hit us around the face with overblown chronicles detailing lurid sex lives or outrageously scheming sociopaths. To some extent this has always been the nature of drama: fantastical tales that lure us from the banality of our lives, the spectacular escape from our everyday-mundanity. And yet, in A Year From Now, we have been presented with a playful and unfetishized look into the very unexceptional world we so regularly seek to leave behind.

The brilliance of this production is that its not real lives retold through rewrites, but rather real lives as told by real people. The only sound is that of the recorded voices of strangers asked where they’ll be in a year from now? No actor speaks. No writer writes. No decisions are made for you. The authorial hand has been halted from constructing another version of what has been said. This is Alecky Blythe stripped bare, and it is all the more refreshing for it.

The troupe of mute actors mouth the recorded words while forging physical apologues that narrate the responses to the question. One woman’s infectious giggle becomes a corporeal ripple, skipping through each actor’s body every time she laughs, while a young child’s fragmented and tangential musings are the inspiration for a game of hide-and-seek, the performers dodging and diving between each other, personifying the boy’s increasingly digressive explanations. The movement becomes not simply a response to the verbatim, but a deeper expression of it, the words visualised in a whirl of vivid and eloquent choreography.

A Year From Now is a show lacking in ego, vanity, or affectation. In a beautifully honest and engaging way the actors are reduced to simple conduits of the stories being told. In such collaborative pieces of work singling out individual performances is counter-productive, and in this particular case would miss the point entirely. What this team so magically achieves together is to make us forget that we are watching actors at all: they are transformed not only into the people whose voices we hear, but the unspoken plurality of allusions and possibilities of language itself. It is simple story-telling at its most unlimited.

Where will you be a year from now?
People aged between 4 and 94 offer astonishingly personal responses to this question, and their answers are brought to life by RedBellyBlack’s visceral physical theatre.

A visual and verbatim story of how we view the time we have.

This happens to be a timely production: employment has hit the headlines again at the time of writing, this time because of the concept of ‘quiet … END_OF_DOCUMENT_TOKEN_TO_BE_REPLACED

An opera (well, technically, an ‘opéra comique’, as there is spoken dialogue) in a relatively small space like the Charing Cross Theatre calls for … END_OF_DOCUMENT_TOKEN_TO_BE_REPLACED

Shoes, one would have thought, are fairly recession-proof. The problem for Charlie Price (Joel Harper-Jackson, reprising the role he previously played … END_OF_DOCUMENT_TOKEN_TO_BE_REPLACED

The descriptions of what happens in this show are so vivid that paradoxically they leave nothing to the imagination – and, at least at the performance … END_OF_DOCUMENT_TOKEN_TO_BE_REPLACED