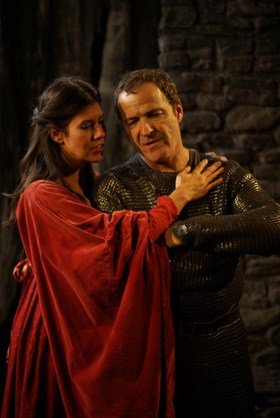 Cordial Production’s Macbeth is a strong piece which is both clearly told and enjoyable. Director Stuart Clarke’s treatment of the material makes this production of Macbeth very much his own. Clarke’s creativity emerges in unique moments within a traditional Jacobean setting. From the start, the intimate size of the Lion and Unicorn is utilised. The Weird Sisters join the queue of audience members before we are let into the theatre and sit with us, their laughter building until they launch into the opening scene. This sense of the Sisters manipulating the events is smartly continued as Act Two begins with the guests at the banquet dancing with the Sisters while the audience return to their seats: the Sisters seemingly puppeteering the guests’ movements. It is suitably eerie and these details neatly create a world in which we are convinced of the Sisters all-pervading influence.

As a team, each and every member of the cast does well at rooting each scene in a sense of place. I’ve seen several productions of Macbeth and this one managed to make the change of locations between scenes clear without relying on the set to do the work. Again, credit goes to Clarke for this: a small cast were used at every stage to effectively convey the context of the stage action and convince us of the wider world in which the scenes were set. Nowhere was this more apparent than in the scenes of preparations for battle towards the end of the play. The soldiers’ sense of anticipation as events lead to Macbeth and Macduff’s confrontation was exhilarating to watch.

As Macbeth and Lady Macbeth, Anthony Cord and Cristina Dohmen do a great job at producing a passionate relationship which gives their scenes a great intensity. Each of the actors who make up The Weird Sisters (Rebecca Bell, Karlina Grace and Siobhan Cha Cha) deserve special mentions. They double as Lady Macduff, a Gentlewoman and Macduff’s daughter respectively and in these second roles each shows neat characterisation which made these scenes particularly enjoyable to watch. However, the cast had a range of approaches to dealing with the verse; while some embraced and emphasised the moments of poetry and heightened language, others seemed to shy away from these moments.

Slight technical elements detracted from the overall quality of the show – at one point, the lights were brought up a little too early so that we could see dead characters making their exit from the stage and in the earlier scenes, slight but nonetheless audible sounds from backstage were a little distracting. However, these moments were disappointing precisely because of a desire to stay immersed in what was happening on stage and the strong storytelling.

Overall, this was an absorbing production which was extremely watchable and engaging.

“By the pricking of my thumbs,  Something wicked this way comes.”
Cordial Productions present Shakespeare’s chilling tragedy, Macbeth. Lured by witchcraft, a great warrior and his formidable lady wife are undone by raw ambition and the most unnatural of acts – to kill a King. Join us for an intimate portrayal of murder and madness.
“What’s done cannot be undone.”