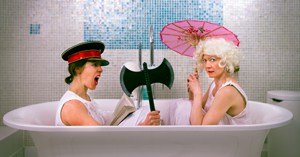 On paper, a play about two women wrongfully imprisoned in an asylum for the criminally insane would not seem like a barrel of laughs, and indeed there are many moving and even downright heart-breaking moments in Charlotte Jones’ two-hander, Airswimming. Thankfully, there are also moments of real joy, optimism and love.

The year is 1924. That at least is when the play begins; time becomes somewhat confused later on. On the eve of her “coming out” party at the Dorchester, Persephone has been sent to St Dymphna’s by her family for the crime of being a “moral imbecile”. In other words, her innocence has led to her having a baby by one of her father’s (married) friends. Blithely convinced that there has been a dreadful mistake, and that they will be coming for her any day now, little does she know that she will remain there, invisible and forgotten, for the next fifty years. A further cross to bear is her chore mate, an “unhinged, cigar-smoking, monomaniac transsexual” called Dora. No prizes for guessing what she’s in for. These two women, so different, so seemingly incompatible, eventually become each other’s rock; comforting and supporting each other through the bad times , of which, inevitably, there are many.

This is, of course, the tragedy; if you are sane when you enter the asylum, chances are, after fifty years, you no longer will be. As the years pass we watch their minds, already fragile, gradually crumble. Persephone’s obsession with Doris Day becomes all-consuming, while Dora’s military persona becomes ever more trenchant. As hope slowly dies, they try to keep buoyant, to keep their heads above water, to keep “airswimming”. That particular scene is so poignant and beautiful that it brings tears to the eyes. As their personalities mutate, they change their names to fit. They are now Porph and Dorph.

Director Stephanie Goodfellow has kept the set cluttered yet simple, much like the minds of the two women. The stage represents their limited world; full of useless, pretty and broken things. Nigel Dams’ musical arrangements are spot on; the repetitive minor strain of Que Sera Sera is particularly haunting. Above all, the two women themselves are captivating.

Alison Nicol, as Porph, is alternately joyously bubbly and horrifyingly vulnerable, and Tanya Chainey’s Dorph is a multi-layered and splendidly nuanced Dorph. Their madness is believable and pitiful, and the connection between them is tangible. The jerky time-line of the play leads to some repetition, which, together with the static nature of the action, could have caused the play to stagnate; thankfully, the spell-binding performances carry it through.

The only difficulty with this play is the fact that occasionally is becomes obscure to the point of being opaque. Important points are clearly being made, but they are occasionally lost in the mists of narrative dysfunction and overly clever wordplay.

The idea of Coming Out is very prevalent in the play. Persephone was about to Come Out at the Dorchester, together they look forward to Coming Out of the asylum, but the reality is that being allowed to really Come Out is a very recent thing. Throughout history, women have been encouraged to stay quiet, to keep their thoughts hidden, to conform.

Unconventional women have, historically, had a very bad time of it. When you have been institutionalised, the idea of Coming Out is terrifying. In this production of Airwimming, Jones, Goodfellow, Chainey and Nicol celebrates the magnificent courage of all of these women.

1924: Persephone Baker is planning her coming-out ball at the Dorchester when she finds herself abandoned at St Dymphna’s Hospital for the Criminally Insane with only ‘unhinged, cigar-smoking, monomaniac transsexual’ Dora Kitson to keep her company. Forgotten for 50 years, Persephone and Dora escape to a surreal fantasy life enlivened by Doris Day, 2000 Bolshevik women, a Moulinex hand whisk and … Airswimming.

By turns funny and desperately sad, Airswimming is a story about friendship and the power of the imagination.

Everyman is one of the earliest printed plays, originally written in Middle English and first performed around 1510. It is a morality play, popular … END_OF_DOCUMENT_TOKEN_TO_BE_REPLACED

After being closed for over two years due to covid, the Arcola Theatre has re-opened with Barney Norris’s love song to the people who raised him, We … END_OF_DOCUMENT_TOKEN_TO_BE_REPLACED

Now in its 15th year, La Clique have firmly established their place on the world burlesque circuit and this year’s London cast bring their infamous … END_OF_DOCUMENT_TOKEN_TO_BE_REPLACED

Warm, funny and lacerating, Satinder Kaur Chohan’s new play opens with a fly-on-the-wall look at the daily attempts women make to be accepted and … END_OF_DOCUMENT_TOKEN_TO_BE_REPLACED