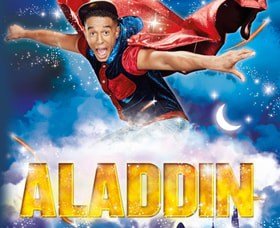 There’s something wonderfully political about the Lyric Hammersmith’s pantomime Aladdin this year. Not just in Joel Horwood’s script, which packs in the requisite Trump and Brexit jokes, plus a cleverly worked visual gag for Article 50, and has the land of Fulhammerboosh ruled over by the Emperor One Per Cent. But in almost every aspect of Ellen McDougall’s production, there’s the kind of astute decision-making that has made her a director to watch and whets the appetite even more for her forthcoming Artistic Directorship of the Gate Theatre.

So the first character we meet is Abanazer, played with lip-smacking relish by Vikki Stone as a cross between Mrs Overall and Grotbag, who pretty much steals the show. And our Aladdin is no clueless US import but rather Lyric regular Karl Queensborough, notching up his eighth performance at a venue where he was nurtured by their youth programme. And casting Malinda Parris as the genie not only releases her sensational powerhouse vocal but also further shows up how questionable Disney’s Aladdin’s gender politics are over at the Prince Edward Theatre.

Thus through these choices, this Aladdin feels refreshed and revitalised, an entirely appropriate piece of family entertainment for 2016. And it does this without ever losing sight of all of the traditional aspects of pantomime that we’ve come to love and expect. So there’s some fantastically saucy humour from James Doherty’s Widow Twankey which (should) fly over the kids’ heads along with the sweets thrown out, there’s tons of audience participation led by Arthur McBain’s excellently sensitive Wishy Washy, and an unflagging atmosphere of fun that never drops.

With a sprightly soundtrack featuring rewritten lyrics to some of the year’s pop hits, an impressively staged magic carpet ride, sing-a-longs and snowfalls, Aladdin is undoubtedly a hit. But it is that it’s a hit very much on the Lyric Hammersmith’s own terms that is most remarkable, along with the message it is passing onto the next generation.

You may not necessarily agree with its empire-abolishing politics (with a big P) but the politics (with a small p) of teaching our kids that girls can be genies too, that hard work pays off, that the magic of great theatre lies in the imagination, are irrefutable. Exciting and entertaining, this truly is panto for the 21st century.

What would you do with three wishes?
The Lyric’s traditional panto returns in 2016 when Aladdin flies into Hammersmith on his magic carpet for some festive fun in true Lyric style.

Fresh for 2016, the show will be full of colourful characters, live music, lots of laughs and of course the magical genie.
Written by Joel Horwood.

If the audience were to be exposed to full versions of the seventy-four songs listed in the programme, it would be a very long show indeed. I suppose … END_OF_DOCUMENT_TOKEN_TO_BE_REPLACED

How can a play be both charming and devastating? Through its tight script, abundant humour and pitch-perfect performances, 4th Country manages to … END_OF_DOCUMENT_TOKEN_TO_BE_REPLACED

Britain, so a London cab driver once told me, is obsessed with the Second World War, as though it happened just recently. Power Luncheon would seem, … END_OF_DOCUMENT_TOKEN_TO_BE_REPLACED