Home » Reviews » All My Sons at The Rose Theatre Kingston – Review 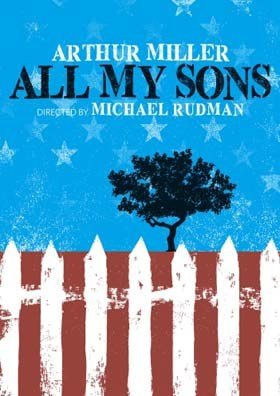 At such a time as this, almost any Arthur Miller play is going to look packed with timeless relevance to the internal conflicts of the U.S. None more so than one of his earliest dramas, All My Sons, which sometimes feels as much Greek – both ancient and modern – in its tragic journey as it does American.

It took him nearly six years to complete, a time span that just about coincided with that of the Second World War. Indeed, it tells the story of family man Joe Keller, the first of many flawed patriarchs in Miller’s repertoire, who has cut corners in his desire to keep his wartime business thriving and his dependents prosperous.

Unfortunately, his business is, or was, the manufacture of aero motor parts, and in 1943, four years before the play opens, a bunch of faulty engine heads left his factory and were the direct cause of twenty-one fatal air crashes.

Because everyone knows, at some level, that Joe was responsible for having them patched over so that they looked OK when they left the factory, the actor playing Joe is charged with the task of making him act as well. His guilt is compounded by the fact that he blamed his deputy manager Steve for the subterfuge. Therefore Joe must carry himself like the embodiment of American enterprise and personal probity, while harbouring a crime which it is the play’s function to roll out into full view.

Under the direction of Michael Rudman, David Horovitch gives an almost unbearable reading of this whited sepulchre, strutting and sparring with his younger accusers like a spent heavyweight, flailing the air as he is bested by the next generation and the emerging truth. Is he tragic or just bent? Or is he both, a basically good man, who in the classical manner is pulled apart by the playing of fate on an essential flaw?

When Horovitch is at his wounded, aphasic best, trumpeting his defence of having done all the things he did in order to benefit his family, he becomes a monster of covert killing, no better than the lousy engine heads which made so many fine young men fall out of the sky.

Then there is his wife Kate, his partner in denial. Actually no, she is his superior in this respect since she is insisting that their son Larry, who committed suicide three and a half years ago after learning of his father’s crimes, is still alive. And because of this insistence, it follows that Larry’s fiancée Ann, who is Steve’s daughter, cannot possibly be allowed to marry Larry’s brother Chris. For all this to work, you need a Kate Keller who is driven less by grief than by the terror of it into a condition of emotional absence and superstition. In this respect Penny Downie matches Horovich to perfection, orbiting him like a waning moon and then clenching herself to a standstill when pain batters down her defences.

What a play for someone still in his early thirties to have written. It shows Miller to have been an angry young man ten years ahead of the English writers who were to have that label stuck on them. No wonder he took a shine to John Osborne’s Look Back in Anger in the next decade and sang its praises to Laurence Olivier. For that is what Rudman’s fiery and neurotic reading enables the play to do as it surveys the all too literal wreckage of the present through the abused ideals of the past.

As dysfunctional American pairs go, these Kellers are up there, or down there, with George and Martha in Edward Albee’s Who’s Afraid of Virginia Woolf? Or, oh dear, Donald and Hillary in Who’ll Get the White House? That is not quite the joke it looks like, since this long-running modern American drama hangs, like Miller’s play, on notions of honour, openness and America’s greatness. For all the blameless house-front of Michael Taylor’s design, the Kellers have been condemned by their own hand to inhabit a moral rustbelt.

I know you’re no worse than most men but I thought you were better. I never saw you as a man. I saw you as my father.
A compelling story of love, guilt and the corrupting power of greed, All My Sons was Arthur Miller’s first great Broadway success sealing his reputation as one of the most influential playwrights of the 20th Century. This is the first time we present work by this extraordinary writer as part of our American season.

Joe Keller is a thriving businessman who, during World War II, knowingly supplied the American airforce with defective engines, leading to the deaths of innocent pilots. To avoid the blame, he let his business partner take the fall, but on a Sunday afternoon Joe is confronted by the consequences of his moral actions as a visitor arrives to reveal a secret that will rip his family apart.

Pulitzer Prize-winner Arthur Miller is one of America’s most significant playwrights. Amongst his most popular plays are Death of a Salesman, The Crucible and A View from the Bridge.

Michael Rudman’s distinguished career includes Associate Director at the National Theatre under Sir Peter Hall and Artistic Director of the Lyttleton Theatre, where he directed Miller’s Death of a Salesman. He later directed the play on Broadway, winning a Tony Award for best revival.

All My Sons is presented “by arrangement with Josef Weinberger Plays Limited”.
The running time is approximately two hours 20 minutes (including interval).

The descriptions of what happens in this show are so vivid that paradoxically they leave nothing to the imagination – and, at least at the performance … END_OF_DOCUMENT_TOKEN_TO_BE_REPLACED

As theatre productions go this is a memorable, magical experience filled with heart and love and so many tiny thoughtful details, that I’m not sure a … END_OF_DOCUMENT_TOKEN_TO_BE_REPLACED

There are no props at all in Dog, and yet despite a dog, Roy, being very much a key character, the staging and dialogue are more effective than they … END_OF_DOCUMENT_TOKEN_TO_BE_REPLACED

Be astonishing. That’s Derek Jarman’s exhortation to the world at large and - at the end of the show - to this particular audience. And in this … END_OF_DOCUMENT_TOKEN_TO_BE_REPLACED