The ‘problem’ with shows like The Best of the West End is that there are inevitably going to be favourite showtunes from favourite musicals that, for whatever reason, aren’t included in an evening’s line-up. Of the musical productions in the West End at the time of writing, there was nothing from Joseph and the Amazing Technicolor Dreamcoat, Heathers the Musical, Six, Amelie, Be More Chill, Pretty Woman, The Prince of Egypt or Andrew Lloyd Webber’s Cinderella. Other tunes slightly conspicuous by their absence in a musical theatre concert at the Royal Albert Hall included ‘Anthem’ from Chess, ‘She Used To Be Mine’ from Waitress, and anything at all from Mamma Mia! But – credit where credit is due – this provided space for other songs. The order of service (so to speak) was an eclectic mix, and included a number of medleys, allowing more melodies to be crammed into a programme so packed the show overran its scheduled running time by half an hour. 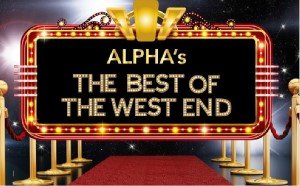 (Not that I’m complaining: I think if I’d been put in charge of organising a musical theatre concert it might well have overrun by longer than that.) The choreography (Stephen Mear CBE) sparkled, largely thanks to a twelve-strong ensemble who provided a feast for the audience’s eyes.

Perhaps because this was the first time many in the audience had ventured out to a concert since The Great Lockdown, and perhaps because the performances were genuinely very, very good – there were, at least from my section of the audience, standing ovations for almost everything. This was, to be fair, mostly a set of utter showstoppers – and some arrangements, particularly in the medleys, weren’t the same ones that get dusted off and reprised year after year. Yes, there were a couple of songs thrown in that weren’t, strictly speaking, from West End musicals: ‘Evermore’ is from the Beauty and the Beast motion picture, and ‘Oh Happy Day’ is from the movie Sister Act (none of the songs in the film are in the stage musical). But I am bordering on indulging in pedantry, and John Owen-Jones and Mica Paris respectively brought the house down.

Layton Williams worked the crowd more than anyone, pulling out all the stops during ‘And You Don’t Even Know It’ from Everybody’s Talking About Jamie in the first half, and again during ‘Diamonds Are A Girl’s Best Friend’ from Moulin Rouge in the second. Sophie Evans and Lauren Samuels did so well in a medley of songs made famous by Judy Garland that I bought a copy of their album Chasing Rainbows, Finding Judy after the show.

Mazz Murray was versatility personified, more than holding her own with the dancers in the title number from 42nd Street, then later belting out ‘As If We Never Said Goodbye’ from Sunset Boulevard. Proceedings ended on a suitable high (by which I don’t mean John Owen-Jones doing that long falsetto note at the end of ‘Bring Him Home’ from Les Misérables): there was a hint of poignancy in all the exuberance that goes with ‘You Can’t Stop the Beat’ from Hairspray, as the West End run had some performances cancelled recently due to public health restrictions.

Worthy of mention are the London Musical Theatre Orchestra (‘LMTO’ to its members and followers), conducted by Stuart Morley, and two choirs, both formed of students, one from Mountview Academy of Theatre Arts (offering university-level qualifications) and the other from MX Masterclass (who run weekend courses for, in their words, “talented young performers aged 10-25 years old”). Ruthie Henshall hosted proceedings in a Covid-secure manner (that is, without a co-host) and, depending on one’s point of view, was either constrained by the radio-friendly script (the performance was recorded for a future broadcast on BBC Radio 2) or appropriately kept on the right track by it. All things considered, an enthusiastic and uplifting and vibrant night out.

One of London’s finest secret venues, the Crazy Coqs Cabaret & Bar at the stunning Brasserie Zedel is the perfect venue for the opening night of … END_OF_DOCUMENT_TOKEN_TO_BE_REPLACED

Stacey Solo (Tamar Broadbent) may well be an all-American criminal investigator, though the sense of irony and sarcasm is often inherently British. … END_OF_DOCUMENT_TOKEN_TO_BE_REPLACED

Just reading Janie Dee’s entry in Wikipedia is exhausting! This multi-talented artiste has achieved so much and her return to Cabaret at The … END_OF_DOCUMENT_TOKEN_TO_BE_REPLACED

From the moment we cross into the circle of caravans leading up to the big top we are transported into a different world. A lighter world of frolic, … END_OF_DOCUMENT_TOKEN_TO_BE_REPLACED

Postponed, as many productions were, due to public health restrictions, Stigma is a deeply personal story spanning much of Luis Amália’s life (or at … END_OF_DOCUMENT_TOKEN_TO_BE_REPLACED