Home » Reviews » An Audience with the Goodies at Leicester Square Theatre

I was very excited to be invited to An Audience with the Goodies and told everyone I knew all about it. There were two very age-dependent reactions. Older people asked if they were still alive and younger people looked blank and asked who? Well after last night’s visit to the Leicester Square Theatre, I can confirm that Graeme Garden, Tim Brooke-Taylor and Bill Oddie are very much alive and as for the Who? Well, let’s come to that in a moment.

For people of my generation, The Goodies were an integral part of our television watching. Three grown men doing childish things that we, as children would never be able to get away with. The show was essential viewing as it was the main part of our break discussions the next day at school. And of course, since the show ended in 1982, the boys have never really gone away. Bill went into watching birds and conservation activities while Tim and Graeme are still the mainstays of the radio series “I’m Sorry I Haven’t A Clue”.

So, here we were, in the theatre waiting for the boys to arrive. The lights and the familiar theme music started up and then suddenly, there they were, Bill, Graeme and Tim, looking older but somehow just as mischievous as they did in the heyday of The Goodies. What followed was a lovely interview covering everything Goodie. There were questions about how they selected the various personas – as Tim said, with a name like Brooke-Taylor, he had to be the posh one – and the writing process for the show. There was even mention of OBEs – Bill was wearing his and pointed out it was less shiny than the other two as he had been awarded it before them. We were also treated to a lot of discussion about individual episodes and found out the truth about the trandem – one of the greatest inventions of the twentieth century. In fact, there was so much there for every fan of the show young and old. The fascinating thing was the dynamic between the three, even 48 years after the show started, they have the same chemistry today they did then. Bill, talkative, with a wonderful memory of events, Tim, slightly quieter but with some lovely anecdotes and Graeme, cool and quiet until he jumps in with a wonderful one-liner to something one of the others had said. Next up was an interval and, as we refreshed our drinks, we were treated to some of the spoof adverts that used to be in the shows. Tim as a schoolboy trying to get his advert about beans right, Graeme interviewing shoppers about their choice of washing powder, and Bill, stealing the squire’s cider to name but a few. 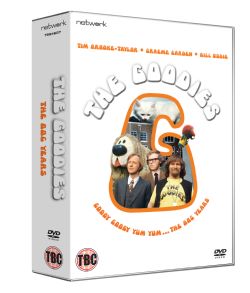 The second half of the evening was a Q&A session with the audience both in person and those that had sent questions in via social media. These covered subjects ranging from how they met, their perceived rivalry with the Monty Python crew and the reasons why their shows, unlike so many from that era, hadn’t been revived on one of the satellite channels. And this brings us nicely on to the reason for the evening, the release of The Goodies: The Complete BBC Collection by Network Distributing in September which is available to pre-order now and features all eight of the original BBC series of the show, plus six specials for the BBC including the classic Kitten Kong – Montreux ’72. There is also a limited edition version called The Goodies: A Binge of Goodies which, in addition to the already mentioned BBC series and specials, contains a recording of this evening’s ‘An Audience with’ event along with a whole host of other special features.

The final question to the boys was from the legendary Barry Cryer who asked what their favourite joke was. Tim’s involved a parrot that knew too much, Bill’s was about parrots and trees, while Graeme’s did not mention parrots and is way too rude for me to repeat here. If you want to know what he said, and everything else that happened during the evening, there’s only one way to find out, so get ordering now.

Leaving An Audience with the Goodies I felt a real pang of nostalgia for the days when anarchy was permitted, without a health and safety risk assessment and television bosses gave their performers the freedom to entertain without having everything pass through twenty committees first. I was also left wondering if I would ever get to see Tim, Bill and Graeme together again. They are getting on a bit now but luckily, even when they ride the trandem to the great cycle park in the sky, thanks to the wonders of technology, their humour and ability to literally make people die laughing will never disappear.

Graeme Garden, Tim Brooke-Taylor and Bill Oddie reunite on stage for the first time in over 10 years for a unique evening to talk about their career and the enduring popularity of their TV series which aired from 1970 through to 1982.

The evening is in celebration of the last, great unreleased box set which is finally about to see the light of day. Longer in the making than a Led Zeppelin retrospective, a Beatles collection or a moon landing, a binge of Goodies is being readied for release for the first time ever anywhere in the world. Including many episodes not seen since their original UK transmission, the box set will be released on Mon 24th Sept and is now available to pre-order.