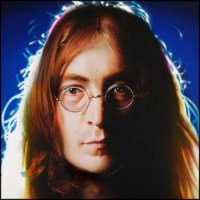 In the midst of death we are in life. For the purposes of this evening, both belong to the late Beatle John Lennon. No sooner has he been cruelly dispatched to an early death in New York in 1980 by the crazed gunman Mark Chapman than he embarks on the story of his life. Where is this account coming from? Heaven or Hell? If you are a Lennon fan, which is not quite the same thing as being a Beatles fan, he and therefore we are in the first; if you find him dumb with drink or dull with rage, it is the second.

In Alexander Marshall’s highly conscientious biodrama, we shuttle between the two locations, as Lennon did on earth. Depending on which of his myriad moods are in the ascendant, we are sometimes treated to a display of warmth, charisma and genuine wit, sometimes condemned to share a stuck lift with an old bore. Not so far removed from Jeffrey Bernard Is Unwell, whose own overnight lock-in in a pub sparks a similar autobiographical recall.

But this is exactly where the conscientiousness lies; Marshall is even-handed enough to unfold a life that was both sublimely blessed and diabolically haunted. The fortunate paradox at the heart of this treatment is that while Lennon had the most restless imagination of The Four, he is more intent in telling how it was, in all its upstaged anguish, than how he would have liked it to be.

The result is a biodrama packed with places and people and dates and references, as teeming in its own way as a Lowry painting, or indeed one of their busy songs in the Penny Lane vein. So while we get the extraordinary exuberance of their early hits, when Britain really did seem to shed its postwar monochrome for a rainbow mood, we also get the trauma that resulted from the desertion of his father and the sudden death of his mother.

Even if it occasionally parades tiny details as if to vaunt the extent of its research, it does have the virtue of leaving little out. There is the early meeting with John and George, the poverty, the squalid but crucial Hamburg period, first wife Cynthia, gay manager Epstein, all those hits, all that screaming (how the musician in John hated that), the great albums mentored by George Martin, the falling-apart of the band, and the world, the saving grace of Yoko and the presence of his two sons. God, it was hard work being Lennon, with his mighty mood swings, outbreaks of nastiness and periods of committed self-loathing.

This is a timely revival of a play first presented on the Edinburgh Fringe in 2004. Timely because of the publication last month of Leslie Woodhead’s book How The Beatles Rocked The Kremlin, which tells the remarkable story of the band’s profound influence on Soviet youth culture at a time when such music was outlawed as decadent. Not the angry Stones or the iconoclastic Who for them, but the joyful harmonies and melodic invention of a timelessly brilliant alliance.

While Lennon asked a lot of himself and others in his life, he remains consistent in death, demanding two hours of hard narrative and surreal noodling from the man playing him. Under Marshall’s direction, Valentine Pelka, a veteran of the Edinburgh and Australia productions, neither lets him down nor leaves him flat. While he has three supporting actors doubling and trebling away, it is inevitably close to a one-man show. He is Lennon to the life – he has somehow managed to inherit the sardonic nose – even the accent comes from a mouth which is not that of the Mersey.

In another life of my own, as a Times journalist, I met both Cynthia Lennon and Paul McCartney. Both of them talked about the sheer joy of making the early songs, yes, and of being around John. For Paul, his death was a loss which he bracketed with those of Linda and his mother.

For both Beatles, love wasn’t all they needed, but it went a very long way. And In The End reminds you that the music was – to use a word from a later time – as much a therapy for the young men who made it as for the world which consumed it. It also makes you remember the deep sadnesses that lay only half hidden in so many of the songs.

Harold Shipman, known to his many patients, family and friends as ‘Fred’, was Britain’s worst serial killer. The official inquiry into his crimes … END_OF_DOCUMENT_TOKEN_TO_BE_REPLACED

Being one of Arthur Miller’s best-made and most challenging plays, The Crucible is also one of his most frequently performed. I was going to say … END_OF_DOCUMENT_TOKEN_TO_BE_REPLACED

To be fair, Linda Lavin called her concert Love Notes, there’s an album of the same name, and that’s more or less what it was about - variations on … END_OF_DOCUMENT_TOKEN_TO_BE_REPLACED

Noughts & Crosses is a euphemism for blacks and whites. The Noughts are the whites and the Crosses are the blacks. In the world of the play, the … END_OF_DOCUMENT_TOKEN_TO_BE_REPLACED

This ‘juke box’ musical offers highly polished, undemanding, feel-good entertainment, showcasing, as it does, 30 songs dating from the 1960s to the … END_OF_DOCUMENT_TOKEN_TO_BE_REPLACED