Home » Reviews » Another Eavesdropping at the Jack Studio Theatre

A twelve-strong cast take it in turns in a rapid-fire production, capturing various conversations that apparently actually took place between people, in public places. It is, of course, a curated selection – if it were a case of simply surreptitiously recording people and staging everything that was overheard, there would be considerably more aggression, confrontation and coarse language than there is here. And that is the ‘problem’, inverted commas mine, with a production like Another Eavesdropping: while it is thoroughly entertaining, it is also a portrait of London that is rather too nice. 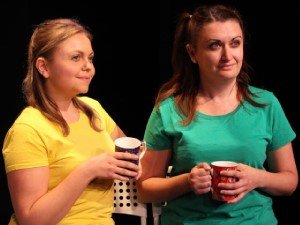 I think, for instance, of a man shouting into his phone at the top of his lungs outside Waterloo Station, declaring emphatically, “I! Do! Not! Need! Anger! Management!” adding, “F— you!”, or the various death threats I overhear on any given day, usually followed by someone appealing for calm and civility, apart from the time someone shouted, “Die Tony Blair!” when I was walking through Trafalgar Square – nobody dissented. The nearest thing in this production to high-octane fury and frustration is a man taking issue with a pharmacist over a repeat prescription allegedly gone wrong, and someone being called a “dumb bitch” for reasons unexplained.

Then again, there’s a difference between unavoidably hearing whatever is yelled over the din of London traffic and the art, if it can be called that, of eavesdropping. To make sense of a conversation, especially without setup or context, as they are presented in this show, requires hearing both sides of it. This means that despite the ubiquity of mobile telephony, its use in this production is, in a word, sparse.

The conventional narrative arc is, technically, absent, and while on paper there is nothing in the way of character development and little in the way of details about the various people the audience are introduced to along the journey, it is nonetheless a captivating insight into what the sorts of things people are talking about these days. And it is rarely what mainstream media would have its viewers, listeners and readers believe are hot topics.

Gloriously apolitical, inasmuch as there is no discernible agenda being forced on the audience, the content is sufficiently broad for at least some of it to be relatable to most people who live in the capital. London does, for instance, attract more than its fair share of religious nutters who think their message is attractive but is actually repellent by way of their condemning everyone to Hell. One of the less zany examples is given in this show. Overall, it doesn’t, refreshingly, go for the shock factor, but also fails to be bland and boring.

The cast are dressed in plain coloured T-shirts, and sit, remarkably stony-faced, on both sides of the stage whenever they are not in a given scene. A large number of props are stored in cubby holes for easy access, and as they are visible to the audience throughout, the more curiously minded patrons can have fun guessing what various items might be used for before anyone deploys them. An intriguing portrait of city living, it’s an enjoyable and energetic production.

It is an honest, poignant, funny and genuine reflection of society that captivatingly reflects the attitudes and opinions of people living their lives in and around London in 2022

Harold Shipman, known to his many patients, family and friends as ‘Fred’, was Britain’s worst serial killer. The official inquiry into his crimes … END_OF_DOCUMENT_TOKEN_TO_BE_REPLACED

Being one of Arthur Miller’s best-made and most challenging plays, The Crucible is also one of his most frequently performed. I was going to say … END_OF_DOCUMENT_TOKEN_TO_BE_REPLACED

To be fair, Linda Lavin called her concert Love Notes, there’s an album of the same name, and that’s more or less what it was about - variations on … END_OF_DOCUMENT_TOKEN_TO_BE_REPLACED

Noughts & Crosses is a euphemism for blacks and whites. The Noughts are the whites and the Crosses are the blacks. In the world of the play, the … END_OF_DOCUMENT_TOKEN_TO_BE_REPLACED

This ‘juke box’ musical offers highly polished, undemanding, feel-good entertainment, showcasing, as it does, 30 songs dating from the 1960s to the … END_OF_DOCUMENT_TOKEN_TO_BE_REPLACED