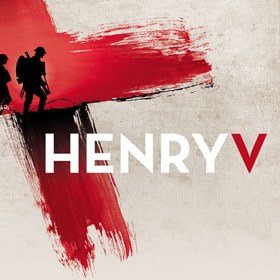 The Southwark Cathedral is certainly a change of environment from the usual slightly, if not grossly, overheated theatre auditorium in which I would usually be seeing a show. As part of my Protestant upbringing I attended a drafty old church in west London for some years, and so roughly knew what to expect, climate-wise, on a February evening. What I wasn’t prepared for was quite how different and spellbinding this production was from any other Henry V I’ve seen before.

The pews I had expected were absent, having given way to infinitely more comfortable, stackable chairs. The audience for this production of Henry V were sat on either side of the nave, facing it. The acoustics are not always suited for the subtler sections of dialogue. This is, after all, a preaching-house, and it simply lends itself better to proclamations than soliloquies. The venue is also a place of worship, and, thanks also to some skilful and subtle actor-musicianship, the musical numbers included in this production could be clearly heard despite the actors performing unamplified.

What? Henry V with musical numbers? Now, the troops don’t tap dance their way into Harfleur or win the Battle of Agincourt with jazz hands. These songs, interspersed through the performance, are either songs of lament and reflection or the kind of marching song in the style of ‘Pack Up Your Troubles’. The former is in keeping with the desire of King Henry V (Rhys Bevan) for his soldiers to “show mercy to them” (that is, the French), the latter in keeping with the need for the soldiers on both sides to have confidence and resilience in the face of battle.

There isn’t as much lampooning of the French as other productions, partly because of this production’s backdrop of World War One. The show impressively deals with the oddity of soldiers fighting on the same side re-enacting the events of 500 years previous on opposing sides. A portrayal of psychological stress brings the 1415/1915 parallel to a most harrowing frenzy as Bardolph (Adam Philps) breaks character: or does he?

It almost naturally follows, then, with a partial resetting to 1915, that I found myself resetting in my own mind Henry V even further into the future, giving some thought to events within living memory. With the order in Act IV Scene VI for each soldier to “kill his prisoners” excised from this production, King Henry V’s humble response to news of victory (Act VI Scene VIII) seems infinitely more admirable than, say, Margaret Thatcher’s ‘rejoice, rejoice!’ with regards to the Falklands conflict, or George W Bush’s rhetoric of ‘shock and awe’ as part of his ‘war on terror’. One of the musical numbers was also very helpful in helping the audience to consider the anguish of parents seeing their husbands and sons go off to the frontline.

The purists will, no doubt, take umbrage at what the programme calls “additional words by AE Housman”, and some minor omissions that a more faithful rendering would have kept in – Fluellen (Andrew Hodges), for instance, dispenses with wearing a leek, so Act V Scene I loses at least a couple of lines. Arguably ironically, this production gets closer to the sort of theatre that would there would have been in Shakespeare’s day than a more lavish production would have provided: with the action taking place in the Cathedral’s nave, there isn’t a huge amount of scenery on stage, so there’s a greater reliance on the text to comprehend the narrative.

Away from the battlefield, both Princess Katherine (Floriane Anderson) and Alice, her lady in waiting (Louise Templeton) are utterly delightful. Overall, it’s an incredibly compelling production, and worth seeing whether you’ve seen Henry V a hundred times or never before. Powerful and poignant.

England’s idealistic army marches to war, certain of a swift and glorious victory. France proudly rallies to defend her borders from invasion. But as nations clash, it is the common soldiers who pay the ultimate price in the bloody mud of the battlefield.

Marking the 600th anniversary of the Battle of Agincourt and the ongoing centenary of the First World War, Antic Disposition presents a new production of Shakespeare’s Henry V.

Performed by a combined cast of British and French actors, the uplifting production celebrates the rich and complex historical relationship between our two nations – from the Hundred Years War to the Entente Cordiale.

Titus Andronicus is not usually a comedy, it is usually a bloody, villainous and vengeful tale, but tonight it is a comedy and a rather amusing one at … END_OF_DOCUMENT_TOKEN_TO_BE_REPLACED

This show is not without clichés - there are three of note in this production. Firstly, the French horn of the show’s title is personified, speaking … END_OF_DOCUMENT_TOKEN_TO_BE_REPLACED

There’s very little in the way of set in this show: aside from chairs, a few crash barriers and at one point, a red carpet, the actors’ movements … END_OF_DOCUMENT_TOKEN_TO_BE_REPLACED

South African born, but raised on the Isle of Man, Pierre Novellie is a true raconteur rather than just another 'stand-up' comedian. He says about his … END_OF_DOCUMENT_TOKEN_TO_BE_REPLACED

This show, Willy Hudson began by saying, is about himself. It is written by himself, is directed by himself and executive produced by himself. Almost … END_OF_DOCUMENT_TOKEN_TO_BE_REPLACED