The king, Artorigus (Emma Kemp) has neither orb, sceptre nor crown, and it is, frankly, odd to see members of royalty and the nobility dressed in double denim (worn as it should be, with darker jeans and lighter jackets). But the plain clothes look only accentuates the text even more, as one is forced to rely on it to figure out what’s going on. There are some very obvious nods to the canon of Shakespeare. Someone even refers to themselves as a ‘strumpet’, and there are a few too many iterations of ‘come hither!’ – this is, after all, a small pub theatre space in which the characters are already in close proximity. 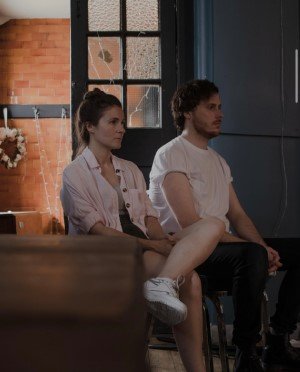 There are distinct differences from the Bard, too. With perhaps a few exceptions, the whole thing is in iambic pentameter, with no significant diversions into prose for supposedly lower-class characters. Make of this what you will: everyone is dressed similarly and speaks similarly. Artorigus, meanwhile, is not exactly a cross between Sir William Wallace and King Henry V – decisive action only seems to be reactive rather than proactive, while the queen, Gwenhwyfar (Tom Plenderleith) asserts herself better than he does. How did Artorigus get to this point? The narrative suggests His Majesty simply got too comfortable with the passing years, and while he began by keeping tabs on affairs of state, this wasn’t maintained to the same degree, and thus he finds himself in office but not in power.

There are a few songs sprinkled throughout the performance, complete with opportunities to witness some actor-musicianship. The production has a familiar feel to it, with plotting and scheming going on and various people jostling for positions of influence. It is necessary, but easy, to maintain concentration, as it’s a briskly-paced performance, and so much happens so quickly. It’s not quite ‘blink and you’ll miss it’, though the relatively sparse staging makes for rapid scene changes, keeping the momentum going.

A love triangle, which is absolutely not entirely separate from the politics and power play, gives the audience some human emotions other than the po-faced personas appropriate when speaking to (or indeed as) royalty. It’s compelling stuff, somehow always a comfortable watch but never a tedious one, with some relatability to the modern world. Themes like loyalty and betrayal are just as pertinent now as ever, and this is a show that allows the audience to make connections between the world of Artorigus and the one in which we live for themselves. A moment of speaking truth to power demonstrates how risky telling it like it is can be. This is a thoughtful and confident production that feels like something you’ve seen before but is also rather unique.

Based on legends of old and inspired by the classical lyricism of Shakespeare.

This modern adaptation of King Arthur blends pros with verse to create a unique look into the themes of stagnation, idleness, betrayal and love.

Artorigus’s kingdom is in danger. His once tight grasp on his beloved realm is dripping through the gaps in his fingers.

He is surrounded from all sides by his shadowy past,
Are his subjects content with his rule?
Can his loyal knights be trusted?

Confronted by his own failure, heartbreak and treachery, Artorigus’ own son Medraut plots to overthrow him and bring in a new age of prosperity for this stagnate domain.

Harold Shipman, known to his many patients, family and friends as ‘Fred’, was Britain’s worst serial killer. The official inquiry into his crimes … END_OF_DOCUMENT_TOKEN_TO_BE_REPLACED

Being one of Arthur Miller’s best-made and most challenging plays, The Crucible is also one of his most frequently performed. I was going to say … END_OF_DOCUMENT_TOKEN_TO_BE_REPLACED

To be fair, Linda Lavin called her concert Love Notes, there’s an album of the same name, and that’s more or less what it was about - variations on … END_OF_DOCUMENT_TOKEN_TO_BE_REPLACED

Noughts & Crosses is a euphemism for blacks and whites. The Noughts are the whites and the Crosses are the blacks. In the world of the play, the … END_OF_DOCUMENT_TOKEN_TO_BE_REPLACED

This ‘juke box’ musical offers highly polished, undemanding, feel-good entertainment, showcasing, as it does, 30 songs dating from the 1960s to the … END_OF_DOCUMENT_TOKEN_TO_BE_REPLACED