As everyone knows, I love immersive and interactive theatre. Maybe it’s the closeted director in me, but the thought to deciding where a story goes gets me tingling inside. Lockdown had temporarily put paid to physical immersive theatre but creatives are never kept down for long, and the Aslant theatre company have put together an online production that meets all my needs with their show Echo Chamber. 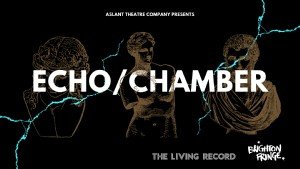 The show is described as a contemporary story about the clash of opposites: opposite viewpoints, ideals, and lifestyles. Successful conservative businessman Paul (Oliver McFadden) is confronted with a dangerous realization that threatens his reputation and calls into question his whole worldview. The reason behind it? A chance encounter with his polar opposite: the unapologetically queer, anarchist liberal Drew (Isaac Hesketh). Intrigued, I logged on, sat back and prepared to make some decisions. After a fascinating opening sequence with Agatha (Sophie McLean) in a voice-over talking about the nature of truth and choice, I had to make my first one. Do I trust Drew or Paul? I’m not going to tell you which way I went, but my journey started with Britney Spears and Lady Gaga.

From there, we followed the story of these two, and I can’t really tell you much more than that. Like every immersive experience, it is very individual and totally depends on the choices you as the viewer make. The difference between this and a standard production is that you are not physically there so, in that respect, it is very different to something like, for example, The Drowned Man where you are physically involved. This is in some respects easier, as you get to sit down and can pause the action if you want time to consider your decision. And believe me, it’s not always a simple choice. A couple of times I really agonised about which way to go, and even now, I’m not sure I made the right choice but, as Agatha says, once you’ve made your decision, you have to see how things play out. In this respect, it’s really like life, only here it was someone else’s future I was playing with, not my own.

Written by Antonia Georgieva and Oliver McFadden – who were also co-directors – the story was not what I thought it would be, indeed I don’t think I could have guessed anything about it in advance. I do think it could have been expanded and gone on for longer, but that’s me, always wanting more control. The characters played by Oliver and Isaac are polar opposites but there is real chemistry between the actors that makes both the characters and the place they get themselves to really believable. Having control meant I was really paying attention to everything happening in front of me and taking in the dialogue and physical movement at a level that is difficult to achieve in a normal show, but works extremely well when sat in front of a large monitor and being only a few centimetres from the action. In fact, the production made great use of video with, on the whole, pretty naturalistic swaps between cameras to move the viewer’s attention from person to person, just as you would normally do yourself in a theatre.

At the end, I had thoroughly enjoyed my journey with Paul and Drew, and really wanted more. There were questions left unanswered and stories still to be followed. However, I will never know the final outcome of decisions. In many ways, this mirrors what happens in real life where every decision has a consequence and creates a new universe from that point on. Whether that’s true or not, I don’t know – I’m a reviewer, not a theoretical physicist. What I do know is that I had a lovely time controlling and sharing the universe of Drew and Paul and would definitely recommend you do the same.

Inspired by The Bacchae, this is a contemporary story about the clash of opposites: opposite viewpoints, ideals, and lifestyles. Successful conservative businessman Paul is confronted with a dangerous realization that threatens his reputation and calls into question his whole world view. The reason behind it? A chance encounter with his polar opposite: the unapologetically queer, anarchist liberal Drew. As each audience member takes a different path through the experience, the piece asks them to evaluate whose side they are on in an attempt to highlight their own biases. Corporate greed, family secrets, prejudice, and sexuality all come to the fore in this bold and feisty adaptation, incorporating the audience’s decisions into a fluid narrative, dramaturged and edited by Aida Rocci.

It is 2002 – another Royal Jubilee year, and HRH (Mary Roscoe) is due to open a new Science wing in a 'sink' comprehensive where Dr Derek Jones … END_OF_DOCUMENT_TOKEN_TO_BE_REPLACED

Dr Anna LaRosa (Dr Stefania Licari) has a lot to say. Just as well, as she’s the only one on stage in this medical comedy, which largely draws its … END_OF_DOCUMENT_TOKEN_TO_BE_REPLACED

Nikhil Parmar’s one-man show, originally written as a TV pilot, manages to touch on a wide range of themes from Islamophobia to modern fatherhood with … END_OF_DOCUMENT_TOKEN_TO_BE_REPLACED

Handel’s 1738 opera Serse (or Xerxes) is an exploration of power, love and human frailty. King Serse falls in love with the voice of his brother … END_OF_DOCUMENT_TOKEN_TO_BE_REPLACED

Lea Salonga has her fans. She also has some superfans, the ones who yell, “I love you Lea!” at almost every opportunity. If that wasn’t enough, there … END_OF_DOCUMENT_TOKEN_TO_BE_REPLACED