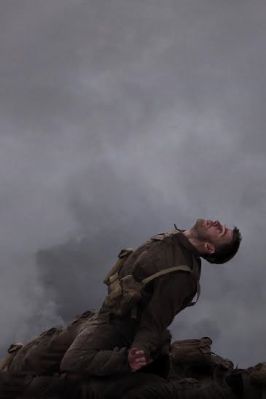 Ballet Boyz’ new work has no ballet in it. It is a visceral and gripping piece of dance theatre, with dancers who are strong, energetic and virile with a tremendous sense of drama.

The opening is immediately disturbing: low lights, ominous, unsettling, sinuous music and young men running, competing in clusters of three in the background while a girl moves among them alone, bemused and fearful. The men play games that are not really games but masculine expressions of tension and aggression, fear, and loss.

The programme, called ‘How The War Turned Boys Into Men’ is a series of contacts and images in which boyish energy, virility and competitiveness are hardened by war into violence, aggression and death. The evening is one of constant tension, all the more impressive because of the repetition of movement within small groups, by individuals and by the entire company. Watching, I had the feeling one has at a dramatic film : ‘What will happen next?’

The tension, visceral and gripping, never let up. The line between energy and violence, playful aggression and murderous hostility has never seemed so thin. Even the interplay between the men and the female dancer balanced precariously between love and violence. The music was more than mere accompaniment, it was an active part of the drama, from the sinuous opening to the insistent pounding build that accompanied the second half of the programme.

The dramatic moments are not in sequence, but remembered as one might remember a nightmare: the killing, the gas, bodies hurling through the smoke of battle, and a still, heartbreaking moment when one of the soldiers realises that he has actually taken a life and slowly sinks under the knowledge. Most of the piece moves in a murky, semi darkness, until the extraordinary final moment when the stage is striped in hard white light and the dancers move through it – into memory? Their memory? Our memory?

This is a piece that one wants to see again. There is a dreadful custom, brought over from America, of giving a standing ovation to anyone who can walk two steps without falling over. This time, the ovation was well deserved.

Young Men is a new full-length production from BalletBoyz, winners of the National Dance Awards Best Independent Dance Company 2013. In an intensely moving portrayal of love, friendship, loss and survival, Young Men explores the theme of war and the bonds that develop between the men consumed by it. Drawing inspiration from images of conflict through the ages, the production is a compelling hybrid of dance, theatre and screen performance from the ever-inventive BalletBoyz and their all male dance company the TALENT.

Featuring the award-winning dancers of the TALENT and live music, Young Men is a co-production with Sadler’s Wells Theatre and 14-18 NOW, WW1 Centenary Art Commissions

The album for this show, I Could Use A Drink, was released in 2013 but there were nonetheless moments when it felt very much like the show was written … END_OF_DOCUMENT_TOKEN_TO_BE_REPLACED

It’s easy enough to get immersed into a production like this. Even in its concert format, there’s something compelling about the way in which the … END_OF_DOCUMENT_TOKEN_TO_BE_REPLACED

I wouldn’t exactly say Ben Forster appearing as himself in this musical comedy is a career highlight (he is, after all, someone who has played the … END_OF_DOCUMENT_TOKEN_TO_BE_REPLACED

It’s an intricate plot, laced with some subversive humour - that the female character is simply called ‘The Woman’ (Molly Lynch), for instance, is … END_OF_DOCUMENT_TOKEN_TO_BE_REPLACED

Andrea McArdle didn’t, when the 1978 movie Rainbow was released, look or sound like Judy Garland, and she still doesn’t. You’d be forgiven for … END_OF_DOCUMENT_TOKEN_TO_BE_REPLACED