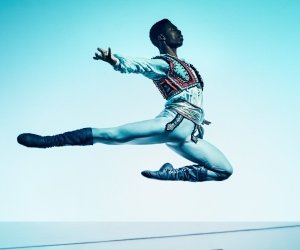 A red carpet occasion to celebrate ENB’s 70th Anniversary and a host of stars on stage and in the audience. From my seat I was in touching distance of Darcey Bussell, Fiona Bruce, Sir Ian McKellen, Bruno Tonioli and Bill Nighy to name a few. On stage we were treated to a cornucopia of delights; stunning sets taking us into the luxurious and cruel world of the Ottoman Empire, sparkling costumes of red and gold, painted backdrops in the style of Delacroix and Hiroshige gorgeous music (Adolph Adam, Giselle) and dancing from some of the best in the business. A real treat.

Based on Lord Byron’s poem of 1814, Le Corsaire (The Pirate) is a cross between Aladdin, The King and I and the Pirates of the Caribbean. With parts for four leading male dancers and a male troop of pirates and palace security guards (with plenty of swords, daggers and whips) Le Corsaire is the perfect ballet to get boys excited about Ballet. As a father of three sons I know how challenging it can be to get boys to even consider ballet.

As a role model for boys and ballet Francesco Gabriele Frola who dances the romantic lead Conrad is a dream. He has it all, looks, grace, power, athleticism and technique. Like all great artists he makes it look so effortless. He has a wonderful dance sequence with Medora (Erina Takahashi) which felt like the ‘anything you can do I can do better’ scene in Annie Get Your Gun, except it was jumps, turns and postures being traded for one-up personship not rifle shots. Erina’s countless turns on pointe are miraculous and gravity defying. The holds Gabriele and Erina execute are truly breathtaking, her back arching almost to breaking point.

The other outstanding moment that deserves a mention is The Dream Sequence in the fantasy garden. Here the corps de ballet hold hoops decorated with flowers through which Medora tip-toes on pointe without respite. The corps de ballet weave in and out making exquisite patterns that charm, delight and soothe. It’s like a wonderful hot bath on a cold day.

Travel to a faraway land for the adventures of a dashing pirate, Conrad, and his feisty girlfriend Medora. Will they outfox villainous schemers and find happiness on the high seas?

English National Ballet is the only UK company to perform this classic story ballet. Their extravagant production, staged by Anna-Marie Holmes, has enthralled audiences and received rave reviews worldwide, including Paris and Tokyo. It returns to the London Coliseum following glorious performances in 2016.

Britain, so a London cab driver once told me, is obsessed with the Second World War, as though it happened just recently. Power Luncheon would seem, … END_OF_DOCUMENT_TOKEN_TO_BE_REPLACED

William J Dunleavy, author and star of this monologue play, is a writer and face to watch. He enters the room (as the staging is more geared towards … END_OF_DOCUMENT_TOKEN_TO_BE_REPLACED

Cirque du Soleil’s Luzia is a joyful whirl through a psychedelic Mexico, which reminds us why live theatre is so special. Anyone who goes to … END_OF_DOCUMENT_TOKEN_TO_BE_REPLACED

I am always very excited to come across a new theatre, and Esher Theatre is a real ‘find’, conveniently situated near to Esher High Street and right … END_OF_DOCUMENT_TOKEN_TO_BE_REPLACED

Cecil Sharp is no unsung hero. Without the energy of this driven and at times prickly musician, the traditional folksong of rural England would very … END_OF_DOCUMENT_TOKEN_TO_BE_REPLACED