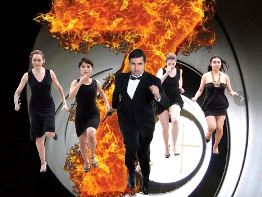 Tucked away in the back streets of Victoria’s current and seemingly vast building site is a new theatre, the newest theatre complex to be built in London for 30 years in fact. St James Theatre comprises of a 300+ theatre space and an intimate 100 seat studio space. It is the latter that hosted the London Ballet Company this week, as part of the Lunchtime Theatre programme. A short but sweet 45 minute dance piece, perfectly squeezed into the lunch breaks of those nearby.

It’s not hard to guess that the theme of 00 and his 7 is, of course, James Bond. The London Ballet Company whizzes you through a typical Bond-like scenario with all the twists and turns we expect told through dance and mime. A diamond necklace is stolen, Bond must interrogate a group of beautiful women, all potential suspects. Are they in cahoots with the thief? Bond is attacked, but who will save him? And where has his assistant been hiding all this time?

The company are to be applauded, primarily for performing on a stage that can only be described as a postage stamp. For the most part, movements were fully executed, utilising the long legs and flexibility of the wonderfully graceful female dancers. There was only occasionally a hint of untidiness in the group numbers, which I fully understand giving the limitations of the space. More contemporary dance than ballet, the company are talented and clearly a dedicated, hard-working group.

Bond himself, danced by Francesco Mangiacasale, was performed with strength, character and most of all, comedy. Playing Bond as a suave, yet slightly bumbling, easily led, flirtatious character, Mangiacasale used wonderful elements of mime, supported well by his glamorous ensemble.

The London Ballet Company is more than just a typical ballet company. Performing bespoke acts for events, both personal and corporate, they have a wide repertoire to suit all needs. A talented young company with clear skills in ballet, contemporary dance, mime, and general entertainment, they deserve a bigger arena to perform than a tiny studio theatre and I’m sure will have much bigger engagements in the future. A very enjoyable lunchtime treat, look out for more of St James Theatre’s various lunchtime programmes of theatre and entertainment.

There is only 1 secret agent who is suave, debonair and whose talent for stopping the “bad guy” is world renowned. He is 007. On His Majesty’s Secret Service, James Bond must find the diamond necklace thief. Find him and he will uncover the diabolical plot to seize control of the world’s financial markets, and bring the affluent countries to their knees.

The album for this show, I Could Use A Drink, was released in 2013 but there were nonetheless moments when it felt very much like the show was written … END_OF_DOCUMENT_TOKEN_TO_BE_REPLACED

It’s easy enough to get immersed into a production like this. Even in its concert format, there’s something compelling about the way in which the … END_OF_DOCUMENT_TOKEN_TO_BE_REPLACED

I wouldn’t exactly say Ben Forster appearing as himself in this musical comedy is a career highlight (he is, after all, someone who has played the … END_OF_DOCUMENT_TOKEN_TO_BE_REPLACED

It’s an intricate plot, laced with some subversive humour - that the female character is simply called ‘The Woman’ (Molly Lynch), for instance, is … END_OF_DOCUMENT_TOKEN_TO_BE_REPLACED

Andrea McArdle didn’t, when the 1978 movie Rainbow was released, look or sound like Judy Garland, and she still doesn’t. You’d be forgiven for … END_OF_DOCUMENT_TOKEN_TO_BE_REPLACED