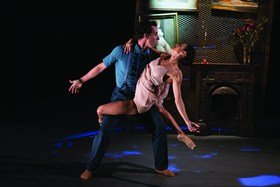 Orwell’’s 1984 is a hapless tale, dark and ominous in its subject matter, where the rebellious protagonists are doomed from the start. The inescapable surveillance from a faceless Big Brother feels just as relevant now in the era of Orwell’s novel. How, then, can such an iconic tale of politics, hate and turmoil be translated into a comprehensible ballet? With such a complex narrative to convey, this reviewer certainly imagined the plot would be boiled down to a series of motifs that inferred at the dramatic moments but the clarity and sharpness within Jonathan Watkins’ storytelling of Northern Ballet’s 1984 was remarkably original whilst still remaining gripping and engaging for those who may not have a strong knowledge of Orwell’s iconic work.

The set is appropriately bare, and the lighting just as bleak, with only the eyes of Big Brother ever vigilant over the proceedings. The opening corps de ballet scenes at the Ministry of Truth (where historical records are falsified) are strong, setting the scene clearly as a series of angular, robotic motifs are repeated, they appear repressed, brooding with aggression under the surface as the word ‘hate’ is emblazoned onto the stage. The boxy, joyless uniforms they come packaged in go further to add to their imprisonment and fear.

The moments of hope are highlighted effectively by Alex Baranowski’s eerie score, the fleeting romantic glances shared between sensitive Winston and mysterious Julia, a fellow Ministry of Truth worker, are quietly thrilling as they hint at the rebellion to come.

Tobias Batley’s Winston is an earnest chap who knows his feelings towards Julia (Martha Leebolt) need to be banished in order to survive the consistent surveillance but is powerless to do so. Once the duo are finally able to briefly break free from their imprisonment it leads to a firstly bumbling, but quickly breathless and sensuous pas de deux that features the most exciting choreography of the evening, as they battle with the anxiety of their rebellious act and of their reckless desire. The entanglement of their bodies only adds to the rising heat of the piece as their desperation to pack in as much in these moments as possible hangs over them. Not one to give his dancers an easy ride, Watkins includes a series of adventurous lifts that Batley and Beebolt pull off effortlessly.

The bittersweet eutopia of the end of Act One is short lived as the two lovers are soon discovered by the ever present menacing eyes of Big Brother and the audience already knows the repercussions will not be pleasant. Room 101 is a stark, lifeless place and Winston’s torture is disturbing and relentless. It’s a difficult watch but one can’t escape from how well constructed these moments of drama are for the audience, truly gripping stuff that makes for a near perfect piece of dance theatre.

Winston Smith lives in a world of absolute conformity, his every action scrutinised by Big Brother. However, when Wilson meets Julia he dares by falling in love. Based on George Orwell’s masterpiece and created by Guest Choreographers and former Royal Ballet dancer Jonathan Watkins, Northern Ballet’s 1984 will change the way you think about ballet. With a brand new score from Tony-nominated composer Alex Baranowski played live by Northern Ballet Sinfonia, see this iconic classic reimagined for a modern audience.