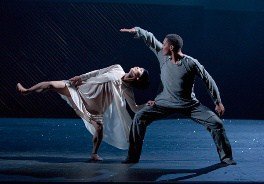 No, there isn’t a typo in the show’s title. Choreographer Mats Ek says in the programme notes, that an early draft of Shakespeare’s tale of star-crossed lovers had Juliet’s name first and so that is why this version has the names in the order it does. The swapping of names is the first big step away from a traditional staging of this ballet. The second is the use of Tchaikovsky’s score, rather than the more usual, and much better known, Prokofiev version. To add fuel to the fire for traditionalists, this is not a standard ballet, there are no men in tights or women in tutus – well actually I tell a lie, there are two tutus in the grand ball scene, one worn by Juliet and the other worn to great effect by Mercutio. What we do have is a stark, black stage with moveable walls that could be anywhere, not necessarily Verona. This lack of definite location, combined with the mix of costumes, from flowing Renaissance inspired gowns to jeans and puffer jackets, gives a sense of timelessness to the staging.

If you haven’t been to a ballet before or don’t know the story of Romeo & Juliet you may be wondering how you will know what is going on without any dialogue, scenery or props in sight. Trust me when I say you will be able to follow every nuance of the story from the opening scene, which is very reminiscent of the start of West Side Story (also based on R&J) with its confrontations between the Montague and Capulet families in various parts of town, all the way through the tragic and beautifully crafted ending.

The entire show is amazingly choreographed and the 32 members of the Swedish Royal Ballet in the production are tested with some complicated dancing and, as if that wasn’t enough, moving the scenery around the stage. Some scenes really were outstanding for me. My personal favourite was when we first meet Juliet as she wakes and greets the day enthusiastically. Her Nurse comes in to get her ward ready for a momentous day and then the parents arrive with the handsome and nerdy Paris, who they plan, will marry their daughter. The interaction between the 5 characters is excellent and the audience is left in no doubt about the relationship between Juliet and her parents, and also her feelings about being betrothed to Paris. In this scene there is a wonderful moment as Juliet seems to blossom from childhood – hiding under her nurse’s skirt at the start – to being a woman as she faces her future and turns away from the chance to hide once more.

The first act ends with a wonderful pas de deux between Juliet & Romeo. They may be from warring families but love really is in the air for the two youngsters, and maybe that love can heal the wounds and bring their families together. Ok this is a Shakespearean tragedy so we know that isn’t going to happen, but the second act starts on a very positive note with an upbeat and optimistic dance as The Nurse meets Romeo’s friends, Mercutio and Benvolio, and the three of them dance together waiting for Romeo to arrive. This dance was so good that normal protocol went out of the window at the end, as the audience applauded the scene. Unfortunately, things went downhill for the characters after this with death and destruction on all sides as the story marched on to its inevitable conclusion.

This was an unusual production. Not the usual music or setting and amazing use of limited props, for example segways roaming over the stage at one point. Sadler’s 15 square metre stage was used to great effect with innovative lighting and moving walls to create rooms, gardens, town spaces, etc. The music is tremendous, and I was surprised how much of it I recognised, but ultimately, it is the dancing that tells the story and that was just spell-binding, mixing happiness, tragedy and an ending that was incredibly moving.

The Royal Swedish Ballet is the world’s fourth oldest and hasn’t performed in the UK since 1995 so it is fantastic to have them over here until the 27th September in this show which is part of Sadler’s Wells “Northern Lights Season” running until 14th November.

The album for this show, I Could Use A Drink, was released in 2013 but there were nonetheless moments when it felt very much like the show was written … END_OF_DOCUMENT_TOKEN_TO_BE_REPLACED

It’s easy enough to get immersed into a production like this. Even in its concert format, there’s something compelling about the way in which the … END_OF_DOCUMENT_TOKEN_TO_BE_REPLACED

I wouldn’t exactly say Ben Forster appearing as himself in this musical comedy is a career highlight (he is, after all, someone who has played the … END_OF_DOCUMENT_TOKEN_TO_BE_REPLACED

It’s an intricate plot, laced with some subversive humour - that the female character is simply called ‘The Woman’ (Molly Lynch), for instance, is … END_OF_DOCUMENT_TOKEN_TO_BE_REPLACED

Andrea McArdle didn’t, when the 1978 movie Rainbow was released, look or sound like Judy Garland, and she still doesn’t. You’d be forgiven for … END_OF_DOCUMENT_TOKEN_TO_BE_REPLACED