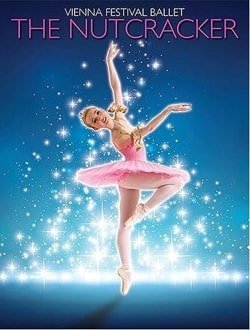 Yesterday I was fortunate to attend a magical performance of something I would describe as being the perfect Christmas show for all. Having seen The Nutcracker on previous occasions, would I enjoy it again?

Can you improve perfection?

Well, The Vienna Festival Ballet Company demonstrated to the entire audience that filled the auditorium that you can.

The curtain rises and we find ourselves at a magical Christmas party, with the magician providing entertainment for all, whilst the elderly grandma provided the humour which had the children in the audience laughing out loud.

At the party, Clara receives the gift of a toy soldier which magically transforms into a real man whilst she is sleeping, all is well until the giant mice arrive and battle commences, the entire scene was well choreographed and was a visual sensation.

The show was encapsulating from the very beginning until the final curtain call, in which the entire cast received a well-deserved ovation.

With beautiful costumes and amazing choreography, to the musical score by Tchaikovsky performed by a truly talented cast, The V.F.B have triumphed again with a performance that is second to none.

The enchanting tale of The Nutcracker is one of the best-loved ballets and centres around Clara and her nutcracker doll, which magically transforms into a princely soldier. Their adventures see the Prince and Clara combat the Mouse King and join the Sugar Plum Fairy for a wonderful trip to a Kingdom made entirely of sweets.
http://www.viennafestivalballet.com/