The Vienna Festival Ballet company have triumphed again with their latest national tour of Tchaikovsky’s Swan Lake. As I along with every other member of the audience that filled The Radlett Centre witnessed a visually stunning piece of art that held the full attention of everyone present from curtain up till the well-deserved curtain call, it was plain to see how the artistic director and world renowned former ballet dancer Peter Mallek has built such a huge following since he founded The VFB in 1980. 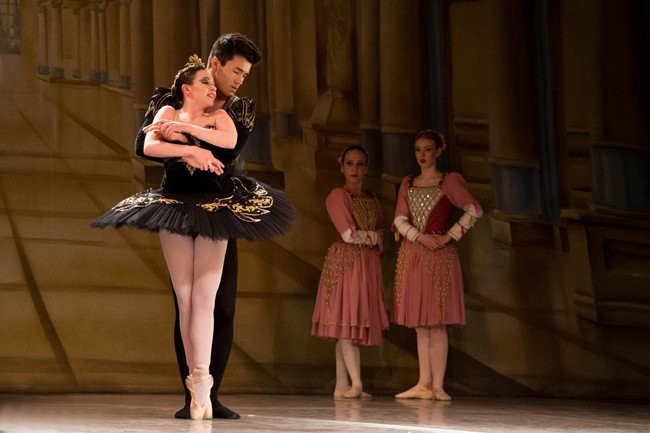 Set to one of the most ear pleasing musical scores ever written, with excellent choreography the tale of love between Prince Siegfried (Yoshimasa Ikezawa) and Odette (Perdita-Jayne Lancaster) unfolded before our eyes, but true love never runs smooth the evil Baron Rothbart (Juan Jose Almeida) with his daughter Odile who has an uncanny resemblance to Odette, in fact the two look exactly alike, trick the Prince into believing Odile is Odette, he publicly declares his everlasting love and the two are now betrothed. Everyone is grief stricken as they can see the Prince has been fooled. Then he sees the spirit of Odette and rushes to the lake.

At the lakeside the Swans looking magnificently beautiful, dance sadly as Odette is distraught with tears the Prince arrives seeking his trure love, Baron Rothbart tries to prevent the couple being re-united but he is defeated and the lovers live happily ever after. The costumes and the make-up were stunning as attention was paid to every little detail.

I hate to single any cast member out as I believe a production of this kind is all about team work but I was very impressed by the performance of Perdita-Jayne Lancaster and loved the way she transformed from Odette to Odile.

The final performance of this tour is at The Wyllotts Theatre in Potters Bar on Sunday 22nd of this month then The Vienna Festival Ballet company will be returning in October with their national tour of Snow White.