Barb Jungr is a bit of a rarity. In the era of the singer/songwriter, Jungr is known mainly as an interpreter of the songs of others although she has been known to write herself. In a career spanning nearly forty years, she’s released albums covering songs from the likes of Jacques Brel, Ray Davies, Leon Russell, Joni Mitchell, David Bowie, Stephen Sondheim and Tom Waits amongst many others but it’s for her albums of Bob Dylan songs that she’s made her name, not only interpreting them but deconstructing the songs and making them her own. 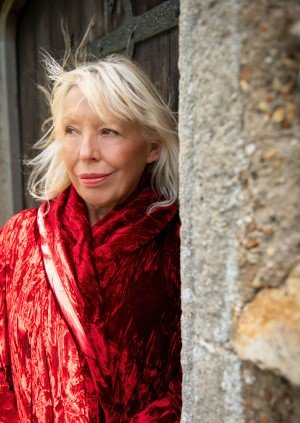 However as good as her twenty plus albums are, it’s as a live performer that Jungr comes into her own as not only does she have a fabulous voice, she’s funny, self-deprecating and entertaining between songs. Most of her shows have a theme and her latest “Dylan And Cohen And Love” adds the songs of Dylan to the love songs of another of her favourite artists to cover, the late lamented Leonard Cohen. Over the next few months Jungr is touring it around the country but last night she was appearing at London’s finest cabaret venue, Crazy Coqs. It’s the perfect venue to see artists such as Jungr as it’s an intimate space that envelops the audience like a warm bath with its superb art deco styling and its convivial atmosphere.

Jungr, aided and abetted on piano (and the occasional harmony vocal) by long time accompanist Jenny Carr, started off with Dylan’s “Love Is Just A Four Letter Word” after which she announced that the song was about as positive as the evening was going to get as “I don’t tend to the upbeat”!

That was followed by Cohen’s “So Long Marianne” and “What Happens To The Heart” and Dylan’s tale of divorce and loss “Isis”. That was followed by Cohen’s majestic “Famous Blue Raincoat” and Dylan’s “Forgetful Heart” which was going to be the title of the show but Jungr said no-one would get it so she changed it to “Dylan And Cohen And Love” so it did what it said on the tin!

Then came Dylan’s “Mississippi” and “I’ve Made Up My Mind To Give Myself To You”, Cohen’s “Dance Me To The End Of Time” and as an encore, Cohen’s “Hey, That’s No Way To Say Goodbye” but it was the perfect way to say goodbye to the packed room. So just ten songs in around eighty minutes but they were all superb choices and Jungr does tend to tell some wonderful stories in between the songs that hold the audience spellbound as she tells tales of trying to find Dylan’s house in Malibu and her teenage love life in Rochdale which had the audience in stitches. Jungr, is quirky, offbeat and possibly “mad as a bag of frogs” (her description not mine). But most importantly she sings like a dream although at the start of the show, she sounded a little croaky and I was worried she was having problems but that was soon dispelled and very soon she was in full voice interpreting those great songs as only she can.

Barb Jungr is a force of nature and if you want to hear Dylan and Cohen’s songs given a whole new lease of life, then get to one of her shows over the next few months – you won’t be disappointed.

Barb continues her love affair with the work of two of the most important songwriters of the 20th Century. Through the lockdown, she thought about love, and in particular the love songs of Bob Dylan and Leonard Cohen, from their earliest explorations to their most recent recordings. In 2014, working with Simon Wallace, Barb released “Hard Rain,” laying herself bare to Dylan’s and Cohen’s political and philosophical songs. But “it’s now time for love,“ she says. “How to love more and with more freedom. How to love everyone and everything. How to be free of all the pettiness of life and elevate to the beauty and purity of love. And who better to turn to than Bob Dylan and Leonard Cohen, two of the greatest alchemists of love ever, in all of its wild wonder.”

Everyman is one of the earliest printed plays, originally written in Middle English and first performed around 1510. It is a morality play, popular … END_OF_DOCUMENT_TOKEN_TO_BE_REPLACED

After being closed for over two years due to covid, the Arcola Theatre has re-opened with Barney Norris’s love song to the people who raised him, We … END_OF_DOCUMENT_TOKEN_TO_BE_REPLACED

Now in its 15th year, La Clique have firmly established their place on the world burlesque circuit and this year’s London cast bring their infamous … END_OF_DOCUMENT_TOKEN_TO_BE_REPLACED

Warm, funny and lacerating, Satinder Kaur Chohan’s new play opens with a fly-on-the-wall look at the daily attempts women make to be accepted and … END_OF_DOCUMENT_TOKEN_TO_BE_REPLACED