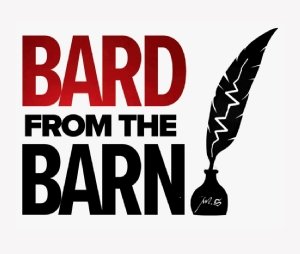 The difficulties fellow theatregoers report when it comes to viewing productions online include technical hitches when a show is broadcast live (which to me is ultimately no different from a situation where the stage manager would come on stage and apologise that the show has had to briefly pause), or just a general ‘it’s not the same’ feeling. It can, I acknowledge, be more difficult to concentrate at home where there are more distractions than there would be when going to the theatre. As I noted recently, for instance, someone knocked on my front door as I was watching a show. Bard From The Barn, then, is on balance, the best of new online theatrical content I’ve come across to date.

Thirty-five videos may seem a daunting prospect, but these are bite-sized performances, the longest being five minutes and forty-seven seconds, with the shortest coming in at one minute and forty-three seconds. I probably shouldn’t say this, but it is possible to not only dip in and out but if there are one or two (or more) in the series that really don’t take your fancy, there’s no shame in skipping to the next one. What I probably should say is that you should at least give each one a chance, but hey, you only live once.

These are all monologues, given a contemporary makeover in terms of context and setting: even if you aren’t familiar with them – I still haven’t seen every play in the Shakespeare canon – you can grasp what the monologues are about. Each episode comes with a description, which, granted, is rather like reading the blurbs next to paintings in an art gallery to make sense of the painting itself, but nonetheless it works.

Many (but not all) the episodes are connected in some way to lockdown – even if it is something like Duncan Drury’s Benedick (Much Ado About Nothing, Act II Scene III) doing some running, stopping to catch his breath, saying his monologue, and taking off again. Others are more intricately linked to the original lockdown orders to stay at home except under certain conditions, which leaves Alicia Charles’ Cleopatra (Antony and Cleopatra, Act IV Scene XV) speaking to Antony via video link because coronavirus restrictions mean she cannot be with him in hospital.

Communication by video links is plentiful in the series as a whole, perhaps predictably so, lockdown restrictions being what they are at the time of writing. Phoebe (As You Like It, Act III Scene V) has a FaceTime call with Rosalind (Grace Liston), whilst King John’s (Matt Ray Brown) entire monologue (King John, Act III Scene III) is in the form of a video call. Occasionally, the background music swells to the point of irritation, and a distorted image for dramatic effect for a line or two becomes a running theme, even with different directors for various scenes.

Hermione (Tricia Adele-Turner) from The Winter’s Tale (Act III Scene II) is – wait for it – a reality television personality, and Helena (Bronte Tadman) in All’s Well That Ends Well (Act I Scene III), is an NHS volunteer, presumably making the most of furlough leave. All this, and more, is bound to rankle the purists, but for the rest of us, there’s much to relish. In all the YouTube videos, Facebook posts, Zoom meetings, Instagram updates, and even a plan from Abigail Matthews’ Hotspur (Henry VI Part I, Act II Scene III) to force a vote of no confidence in the Prime Minister for poor handling of the coronavirus crisis, the words of Cassius in Julius Caesar (Act III Scene I) ring loud: “How many ages hence / Shall this our lofty scene be acted over / In states unborn and accents yet unknown”.

The repurposing of the Bard’s work for the modern era doesn’t always work – I’m always reminded of the 1996 Baz Luhrmann film Romeo + Juliet, in which characters say they are drawing ‘swords’ but actually pull out handguns – but this is a remarkable achievement, enjoyable and relatable, inventive and impressive.

Bard From The Barn launches new episodes every weekday at 5pm with a weekly review episode every Friday at 9pm that features exclusive discussions between co-producer Aaron Sidwell, lead editor Benjamin Collins and the cast and creatives of Bard From The Barn.

You’ve heard of Shakespeare’s Globe and the Royal Shakespeare Company, now it’s time to be introduced to the Barn Theatre!

Bard From The Barn