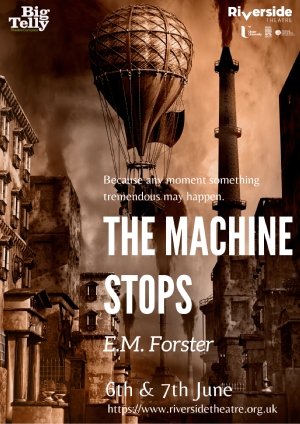 A few months ago all the word Zoom meant to me was the title of two songs, one by The Commodores and one by Fat Larry’s Band but I was soon to find out it was also the name of a video-conferencing application that allowed people from all over the world to communicate with each other with both sound and vision. After having a Zoom meeting with a charity I was involved with, I was hooked and have been using it ever since at least three times a week to meet up with family, old workmates, friends I haven’t seen for years – there was even one for my fellow reviewers for London Theatre1. But obviously I wasn’t alone in discovering Zoom and many theatre companies and performance groups have been using it to perform Shakespeare, Chekov and other pieces that have been specially written for the medium.

The first one I saw was Big Telly’s Theatre production of Operation Elsewhere which I reviewed here and really enjoyed it. Now just a few short weeks later, they’ve produced a new piece, The Machine Stops based on a short story by E M Forster written in 1928. It tells of a world where humanity lives underground and relies on a machine for all its needs and people are banned from going up to the surface of the planet.

Like Operation Elsewhere, it’s inventive and creative and the visuals are a step up from the company’s previous production. There are some excellent backgrounds using greenscreen and the transitions between the characters (all of who are separately at home in isolation) are excellent. There’s a large cast some of who play more than one character although the quick changes didn’t always work but that added to the fun of it. It touched upon several issues including euthanasia, the rights of the individual and the right to reproduce. There was also a resonance with our current situation with everyone locked down and having to conform to rules laid down by a government – in this case, the machine itself.

Along the journey we meet various larger than life characters including a bearded lady, a singer, a hypnotist and the authoritarian committee who run the machine – or does it run them? There’s also a trip on an airship, a journey along an underground tunnel, a clever card trick and someone plays the didgeridoo!

Like Operation Elsewhere, there’s also audience participation. We’re asked to hold up a book, a piece of paper to denote our egression papers and make various other gestures. As we were acting out the things we’re asked to do, audience members were randomly selected and highlighted on-screen so we could see it wasn’t just us making fools of themselves sitting in front of our computers, tablets and phones!

Whilst The Machine Stops was very enjoyable, it wasn’t quite as good as its predecessor. At times the narrative was a bit flabby and wandered off-course – there was a whole sequence in the middle that didn’t quite work. Also, there seemed to be less audience participation this time which made Operation Elsewhere so much fun and added another dimension for the audience – almost a replacement for the missing out on the live theatre-going experience.

The future of conventional live theatre is still a complete unknown and it will be a while until we step into a theatre to see live actors on stage with less than two meters between them. In the meantime, we can enjoy the innovative, creative initiatives from companies like Big Telly to give us our theatrical fix.

A short story written by E. M. Forster in 1909 about people living in isolation has become an eerily relevant tale for our times. The Victorian writer could never have imagined that we would be adapting the work for lockdown in 2020.

Recent Zoom productions were a huge success – ‘The Tempest’ and ‘Operation Elsewhere’ were watched by over 5,000 people in 14 countries so far and featured by the UK national press and media, and The New York Times and CNN in the USA.

Big Telly’s adaptation of ‘The Machine Stops’ is a live, interactive and creative illustration of Victorian culture and psyche, and beautifully illustrates the era’s culture, thinking and fears just as the western world was beginning its accelerated journey into modernity, just as we consider our new normality after lockdown.