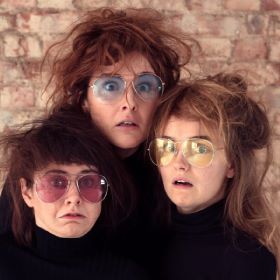 Bits sees Guttersnipe Theatre nervously enter the stage in skimpy swimming costumes, messy make-up, wild hair and their not so glamorous knickers clearly visible. They then begin gyrating and perform a very amusing version of Little Mix’s “Power” with a clear attempt at “sexy”.

As the show unfolds, the women repeatedly attempt to take centre stage and tell us something, but for one reason or another they never quite manage to. They are consistently squashed and unable to speak their own minds. Instead, the women are manipulated through a series of sketches.

One of my favourite scenes was where the women were seemingly at some sort of audition. Here a recorded voice instructs them; asking them to be tired, to be hungry, but horny, then pregnant but thin, to jog – excitedly, to laugh, to dance but not too enthusiastically, to not move whilst dancing, to dance with their eyes only. The ridiculous instructions keep on coming and the women exhaustedly try to appease. Their panic and frantic attempts to do what is required portray the ludicrous nature of the pressures women face to fulfil a desirable role within society instead of just being.

We also saw them go through a bag of various foods. They went through the items one by one telling us how we could use them for our hair, our teeth our face but the items were “not for eating” and were each thrown away. Crisps were scrunched up and thrown as confetti, galaxy bars could be given as a gift but every item was discarded until Gruesy caved and devoured a muffin. The other two performers look at her in horror and she ashamedly leaves the stage.

The character’s we see throughout are reminiscent of Bouffon. Whilst their make-up and hair is exaggerated and clown-like, I think the oddness of their appearance could have been pushed more. I do see the appeal of their matching black costumes, which were put on over their swimming costumes near the start. They were versatile for taking on each scene and it made sense that they wore matching clothes and were seen as a unit rather than individuals. But they could have been more grotesque. At one point they put on lipstick which becomes a phallic image that they begin poking in different orifices and paint all over their bodies. Moments like this could have happened throughout so that their images become even more deformed. I would have liked to see the food from the bags spilt all over them so that their initial attempt at sexy was over-ridden and they were left completely dishevelled and deteriorated by the end.

The women did often come together to have unintelligible group meetings before returning to the audience. These were nice moments where we began to see the relationship they shared between them. However, they could have been framed better. Whilst the gist was that they were offering one another support and motivation to carry on it was not entirely clear. Furthermore, these snippets of chatter were also played as an audible sporadically and I am not sure why. There seemed no need to play this as a recording if they were also doing it live on stage, unless it was just a clear break between scenes. This idea needed some more thought, and perhaps in time could serve as some sort of thread so that the piece had a clearer narrative.

Eventually, the performers came forward one by one to try and speak but are each interrupted by an audience member throwing sweets at them. Lolly is thankful for the gesture until more sweets are hurled at her until she is reduced to tears. It did not escape my notice that the audience member was male and I could not help likening this situation to issues of consent. It seemed a powerful moment when the women joined together to proclaim they did not want to do this anymore. That they then once more took to the stage to perform their sexualised dance to Little Mix’s “Power” was profoundly sad. Despite their best efforts they had come full circle to find themselves once more become “SLUT DROPPING and SCANTILY CLAD BABES” which is “NOT what Lolly, Mace and Gruesy wanted to include in their show”. The irony of the lyrics “You should know, I’m the one who’s in control” were poignant as we saw them left with no autonomy of their own.

This was the first time Guttersnipe Theatre had performed the show. Whilst it was not perfect, and ideas need to be developed and thought through more, this ending really stuck with me and the whole piece is something I feel excited by. Guttersnipe Theatre are really beginning to grasp at something, and with some further development, I think this company could really be one to watch out for.

SLUT DROPPING and SCANTILY CLAD BABES were NOT what Lolly, Mace and Gruesy wanted to include in their show.
However the powers that be have other ideas. Faced with the harsh reality of the show biz industry, Lolly, Mace and Gruesy have had to make some compromises. These three oppressed creatures attempt to take the space but are consistently squashed, squeezed and silenced in this new meta-theatrical extravaganza.

An explosive exploration of our expectations of women. Lolly, Mace and Gruesy are here to make some positive disruption even if it means tearing apart their own show.

Everyman is one of the earliest printed plays, originally written in Middle English and first performed around 1510. It is a morality play, popular … END_OF_DOCUMENT_TOKEN_TO_BE_REPLACED

After being closed for over two years due to covid, the Arcola Theatre has re-opened with Barney Norris’s love song to the people who raised him, We … END_OF_DOCUMENT_TOKEN_TO_BE_REPLACED

Now in its 15th year, La Clique have firmly established their place on the world burlesque circuit and this year’s London cast bring their infamous … END_OF_DOCUMENT_TOKEN_TO_BE_REPLACED

Warm, funny and lacerating, Satinder Kaur Chohan’s new play opens with a fly-on-the-wall look at the daily attempts women make to be accepted and … END_OF_DOCUMENT_TOKEN_TO_BE_REPLACED