Although not entirely perfect, this staging – the first ever in the UK – of Pablo Sorozabal’s Zarzuela (Spanish Operetta) is brilliant, atmospheric, moving and one of the most satisfying productions I’ve seen this year. 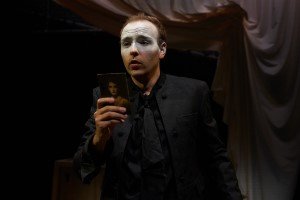 Imagery of the clown (el payaso) – and specifically the Pierrot of Comedia dell’arte – has long represented social outsiders and the disenfranchised, as depicted in Picasso’s rose period or more recently in Alex de la Iglesia’s Spanish Civil War darkly comic 2010 film The Last Circus (Balada Triste de Trompeta). Today, it seems, there is double allegory whereby the code used to speak of the Spanish Civil War is now further illuminating contemporary demagoguery and populism in all its sad absurdity. Black the Clown provokes such associations whilst also delivering artistically – with great beauty and considerable humour – on its own terms.

We meet the clowns, Black (Michael Lafferty) and White (Giuseppe Pellingra) emerging from wooden crates with lighting (Lucia Sanchez) and costumes (Caitlin Abbott) evocative of both cabaret performance and Beckettian absurdity (I was reminded of Endgame and the two-hander scene within rubbish bins). They poke fun at the pomposity of the audience whilst we notice a young boy (Simon Bundock) in his bedroom high above the stage choreographing the action with a model set. This is an operetta written in 1942 and so there is a certain amount of classic wackiness: mistaken identities, impersonation of royals, exaggerated and immediate amorousness. There are also spectacular songs that showcase the musical abilities of the cast.

All the cast’s voices are highly trained and rich, but I was particularly impressed (and moved) by Raphaela Papadakis’ (Princess Sofia) soprano and Pellingra’s baritone. As part of the Arcola’s ‘Grimeborn’ season that democratises opera with top tickets available at only £30, Paula Paz’s production draws on the substantial ability of just two musicians, Ricardo Gosalbo on piano and Elena Jauregui on violin (and several other instruments). The versatility of an ‘orchestra’ of just two players is breath-taking and the musical experience in no way feels ‘pared down’.

Sorozabal’s operetta features a fair amount of dialogue (unlike, for example those of Gilbert & Sullivan which are delivered almost entirely in song). As such, it demands top-notch operatic voices along with straight acting skills. The two clowns, Lafferty-Smith and Pellingra, are impressive actors as well as singers. Juliet Wallace (Catalina) has a killer singing voice but her acting came across as slightly wooden on occasion. The only cast member who doesn’t sing is the boy who comments and narrates from his perch. This role is an addition to the original by director Paz and is an interesting choice. Adding a degree of distance from the action so that the audience’s thoughts are drawn to the allegorical implications works creatively and doesn’t slow down the pace. However, Paz has given Bundock much dialogue to perform and at times it was hard to understand him. I suspect this may have been press night nerves and he will relax into the speeches with greater clarity of diction.

Although the modern political parallels are obvious, Black the Clown explores not only the notion of performative power grabs but also the motivations to do so; contrasting the experience of being loved and feeling at ease with one’s identity against cravings for the adulation of the crowd. It looks at literally being an imposter as well as feeling like an imposter emotionally.

Paz’s production of Sorozabal’s Zarzuela is an unusual treat: thought-provoking, but neither heavy-handed nor preachy, and aesthetically spectacular.

Exiled from a country immersed in civil war, two clowns find themselves in the heart of the Parisian underworld at a time of revolution.

Black, el Payaso / Black, the Clown is one of Pablo Sorozábal‘s most ambitious and wide-ranging work. An ingenious allegory of art and nationalist politics, its sharp and political edge that remains relevant today. The libretto is based on the French novel La princesse aux clowns by Jean-José Frappa.

This zarzuela (a Spanish opereta) first premiered in Spain in 1942. This Cervantes Theatre production directed by Paula Paz marks its UK premiere.

This happens to be a timely production: employment has hit the headlines again at the time of writing, this time because of the concept of ‘quiet … END_OF_DOCUMENT_TOKEN_TO_BE_REPLACED

An opera (well, technically, an ‘opéra comique’, as there is spoken dialogue) in a relatively small space like the Charing Cross Theatre calls for … END_OF_DOCUMENT_TOKEN_TO_BE_REPLACED

Shoes, one would have thought, are fairly recession-proof. The problem for Charlie Price (Joel Harper-Jackson, reprising the role he previously played … END_OF_DOCUMENT_TOKEN_TO_BE_REPLACED

The descriptions of what happens in this show are so vivid that paradoxically they leave nothing to the imagination – and, at least at the performance … END_OF_DOCUMENT_TOKEN_TO_BE_REPLACED