By the production’s own admission, the version of events as detailed in Bonny & Read is unlikely to equate to an exactly full and fair account of what happened to Anne Bonny (Eliza Shea) and Mary Read (Justine Marie Mead), though the production is not at fault: there are unreliable records from their trial in 1720, as well as the years leading up to it. Read was sometimes known as Mark, because she was able to disguise her identity for as long as she wanted, probably to be accepted by other pirates, who were all, bar very few exceptions, men. But once she felt the time was right, she flashed at them. She had proven her worth by then, so was able to stay on. A remarkably similar path to acceptance occurred, so this production would have it, for Bonny. 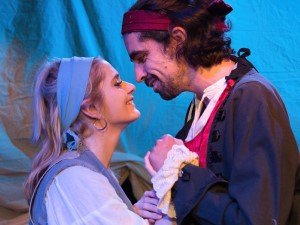 There is much use of rhyming couplets here, which some members of the press night audience thought to be skilled and clever. Others found them quite insufferable. I thought it was overused as a narrative device and came across as trying too hard. Some don’t quite rhyme in the first place. For instance, “We’re fearless and brave / And we’ll be no man’s slave”. It’s an odd use of the word ‘slave’: was there ever any feasible chance that the Irish Bonny or the English Read were to put on a transatlantic slave ship?

Calico Jack (Duncan Drury) – or John Rackham, to give the English pirate captain his proper name – isn’t, at least as he is portrayed here, the kind of leader that rules by way of tyranny, even if he does manage to seduce Bonny to the point where she divorces her husband. The story largely progresses by way of direct addresses to the audience, most of which are done, unsurprisingly, by the Narrator (Mark Nicolson). There are some scenes that include dialogue between characters, but the songs are mostly – no, entirely – unmemorable, mostly sound similar to one another, and more often than not do little if anything to move the story along, instead amplifying certain emotions being felt at the time.

There’s nothing inherently wrong at face value with using songs for that purpose – indeed, a lot of musical theatre does exactly that. But the audience is kept waiting too often for a song to finish so the plot can continue, and when it does, a lot of details are revealed relatively quickly (curtain call came about fifteen minutes before the production’s published finish time). Some variation of speed is welcome in a show, but this seems to go from the speed of a town centre traffic jam to exceeding motorway speed limits, and back again. It’s an uneven evening, to say the least.

The good thing about this production is that no prior knowledge of these pirates is required, as sufficient explanation is provided – there are even ‘historical notes’ included in the programme. There may be some relatability in the modern era – the lead characters stay true to themselves despite having conformed to some of the accepted behaviours of the other pirates. It’s a fine line between standing up for one’s principles and doing what one believes needs to be done to get ahead in life. In the end, the embellished narrative leaves one unsure as to whether to trust anything seen and heard, which in turn sadly makes it difficult to care much for these characters.

“Our voyage isn’t for the fainthearted”
Based on the trials of Captain Rackham and his pirate crew in Jamaica in 1720, history meets myth in this real-life story of the remarkable, cross-dressing women pirates Anne Bonny and Mary Read, and their fateful encounter with the infamous Jack Rackham, also known as Calico Jack.

Bonny & Read depicts the circumstances that led these two women to disguise themselves as men, go out to sea, and join the notoriously male-dominated world of piracy. This epic voyage of twists and turns is a story of exceptional female bravery, adventure, and survival against all odds. Bonny & Read is a new musical play by Claire Novello, with music composed by Frederick Appleby, and directed by award-winning director Kenneth Michaels.

If the audience were to be exposed to full versions of the seventy-four songs listed in the programme, it would be a very long show indeed. I suppose … END_OF_DOCUMENT_TOKEN_TO_BE_REPLACED

How can a play be both charming and devastating? Through its tight script, abundant humour and pitch-perfect performances, 4th Country manages to … END_OF_DOCUMENT_TOKEN_TO_BE_REPLACED

Britain, so a London cab driver once told me, is obsessed with the Second World War, as though it happened just recently. Power Luncheon would seem, … END_OF_DOCUMENT_TOKEN_TO_BE_REPLACED