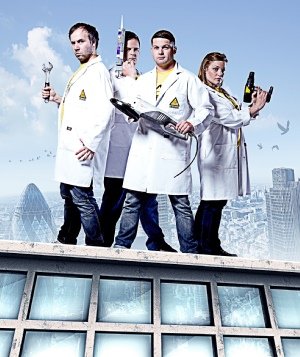 The original Sky One TV series, Brainiac: Science Abuse, hung up its lab coat for the last time some 11 years ago so not only did my seven-year-old twins have absolutely zero familiarity with the franchise but I also entered the Garrick Theatre with a healthy dose of telly-brand-extension scepticism. Fast-forward to an hour later and their grins of delight seem to have become permanent and I’m now the proud mother of two super-fans! This show is short, sharp and absolutely exhilarating for curious kids. Whether you’ve got a STEM-mad Ada Lovelace-in-the-making or a child who just likes to watch things explode, this 60-minute entertainment spectacle thrills with every crash, bang and wallop.

Whilst it seems slightly odd to be in the grand 19th century theatre named for legendary 18th century actor-manager David Garrick and where Sir Laurence Olivier trod the boards in order to watch three men and a woman lark about with explosive gases, the fact that this show is conveniently an (action-packed) hour long and takes place just north of Trafalgar Square means it’s a great focal point for a summer holiday afternoon without feeling you’ve wasted the sunshine by being stuck inside. The only draw-back to the show running at the Garrick is that, unlike many other West End theatres, it doesn’t have any booster cushions for children to improve their view of the stage. I’d therefore recommend checking the sightlines on the seating chart with consideration of the height of your children and possibly book the front row of the dress or grand circle if you think they might struggle to see the action. On the other hand, no one in the audience objects to kids jumping from their seats because the ambience is deliberately vocal and rambunctious. You will not need to ‘shhh’ your children as they get swept away by the presenters and the experiments – it’s all part of the fun!

With animated graphics projected on a large screen serving as short interstitials whilst the set is changed for each experiment, the show flows with excellent pace. It does feel a bit like being in the live studio audience of a TV broadcast but with more polish and no pauses to set up. The kids get a reasonable dose of credible scientific explanation pitched just right whilst enjoying spectacle and thrills in a well-structured format that balances stimulation with didacticism.

The show is rated 6+ which, given some of the loud noises and the need to cover your ears now and then, feels about right. There is a single moderately ribald joke (of an entirely pre-watershed variety in any event) that went over my kids’ heads. If you do have a child who is especially sensitive to loud noises, you may want to consider bringing your own ear defenders but the high volume moments are well signposted and fingers-in-ears seemed to do the job just fine for the kids at the performance I attended.

I was pleased to hear Mary Anderson (inventor of windscreen wipers) and proto Wi-Fi inventor (and Hollywood legend) Hedy Lamarr get a shout-out to inspire and include the young Rosalind Franklins and Mae Jemisons of the audience as much as the children who share gender with Nikola Tesla. With the urgency of inspiring girls to continue their natural fascination with science and invention, I would have liked to have seen equal representation of women amongst the Brainiacs but alas Maggie Frazer as Brainiac ‘Raz’ was the sole female Brainiac of the four.

If you love the Science Museum’s Wonderlab shows and want an extended high-energy and highly polished edition with a bit more production value, this is the show for you!

Brainiac Live!, the show that laughs in the face of science is coming to London’s West End for a strictly limited season from 31 July to 1 September 2019, with a press matinee on Friday 2 August at 2.30pm.

Based on the much loved, popular science entertainment TV show, Brainiac Live! is a breathless, fun and fact-filled exploration of the weird and wonderful world of science, that through a series of high energy experiments delves fearlessly, and perhaps a little foolishly, into the mysteries of science. Expect exploding dustbins, supercharged spinning chairs and the ultimate Airzooka challenge!

Brainiac Live! has thrilled fans of all ages, headlining science festivals and performing at theatres across the world, blowing the minds of hundreds of thousands of children and their families.

Think back. Has anyone ever said to you that looks don’t matter, its personality that counts’ Anyone that answered ‘No’ to that skip to the next … END_OF_DOCUMENT_TOKEN_TO_BE_REPLACED

A Streetcar Named Desire might just happen to be on the minds of regular theatregoers in London at the time of writing, on account of the Almeida … END_OF_DOCUMENT_TOKEN_TO_BE_REPLACED

Titus Andronicus is not usually a comedy, it is usually a bloody, villainous and vengeful tale, but tonight it is a comedy and a rather amusing one at … END_OF_DOCUMENT_TOKEN_TO_BE_REPLACED

This show is not without clichés - there are three of note in this production. Firstly, the French horn of the show’s title is personified, speaking … END_OF_DOCUMENT_TOKEN_TO_BE_REPLACED