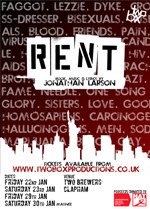 When it comes to musicals, I’ve seen my fair share. And whilst I’m not saying I’ll ever be bored of the west end hits, it’s always exciting when something different comes along. Two Box Production’s RENT at The Two Brewers in Clapham was an exciting production.

The show uses traverse staging, essentially creating a catwalk in the centre of the studio space. In what was described as an ‘Immersive’ performance, the stage spread through and around the audience, which gave both exciting challenges and opportunities to the creative team.

The entire ensemble gave incredible performances, with no weak-link in the entire cast. Each of the principals captured the essences of their respective characters and the chorus were all wonderful in their roles, providing a beautiful display of collaborative movement work. Rachael Blaney had the wonderful gift of acting as both director and choreographer, which provided a superb continuity between the direction and the dance. This allowed for a physically exciting and, more importantly, engaging production.

The story was narrated by Mark Cohen, played to perfection by Craig Nash. Nash not only built a crucial rapport with the audience in his first few moments on stage, but he was also able to capture a distinct set of idiosyncrasies and characteristics which allowed for a natural realistic character to be formed. His performance could not be faulted. He was superb, and I look forward to seeing him going on to do great things.

Stirling Worthy’s portrayal of Angel was simply beautiful. His entrance made me laugh, his exit made me cry and an outward display of confidence was balanced en point with an inner fear for what was to come. He also worked his heels like a pro. This performance added an interesting contrast to his relationship with Tom (Derek Aidoo), and the two worked beautifully together.

Simone Cornelius gave a sassy performance as Maureen which was fun and fresh. Sara Lynam had a perfect attitude as Joanne; at times stern, at times emotional, and constantly generous to her fellow performers.

Joshua Newman, Phoebe Rose White and Huw Cook filled the rest of the principal cast as Roger, Mimi and Benny, respectively. The whole ensemble supported each other throughout, which formed the emotional and spiritual connection that is completely vital for this show to work.

At times, the blocking became a little confusing, however, Blaney was usually able to pull through these moments by leading to pleasing climactic tableaux; although this did at times hinder the pace of narration, making it slightly confusing for someone who is experiencing the show for the first time.

Whilst the band played beautifully, led by musical director Dan Turek, the show did at times become challenging to follow, with the music so much louder than the actors. For a first time viewer who didn’t know much about the story, this did mean I had to rely on body language and movement for much of the performance to follow the plot. Had the sound levels been adjusted, this really had the potential to be a perfect all-round production.

Nevertheless, it was still extremely enjoyable and an excellent display of how musicals can be staged a little differently. I do question the use of ‘immersive’ in the description, and felt that for this to be accurate I would needed to have felt a little more immersed. Despite moments of breaking the fourth wall, I still felt a gap between myself and the characters.

All in all, a brilliant production, which is raising money for a great cause. A few tweaks here and there and it could be perfect.

Exactly 20 years after the opening of the original off-broadway run, TwoBox Productions is bringing RENT to London!

RENT follows 8 friends from Christmas Eve through a difficult, transitional year of their lives. Initially they seem content with their bohemian lifestyles in New York, but eventually they allow the audience to see their true pain and insecurity. When faced with loss, the cracks begin to show as the group questions whether life would be better were they to live their lives apart and face their vices alone.

This is a charitable production, raising money for the National AIDS Trust.

The background stays largely the same throughout the performance, and appears to resemble the hairstyle of Elle Woods (Courtney Bowman). Regardless, … END_OF_DOCUMENT_TOKEN_TO_BE_REPLACED

Everyman is one of the earliest printed plays, originally written in Middle English and first performed around 1510. It is a morality play, popular … END_OF_DOCUMENT_TOKEN_TO_BE_REPLACED

After being closed for over two years due to covid, the Arcola Theatre has re-opened with Barney Norris’s love song to the people who raised him, We … END_OF_DOCUMENT_TOKEN_TO_BE_REPLACED

Now in its 15th year, La Clique have firmly established their place on the world burlesque circuit and this year’s London cast bring their infamous … END_OF_DOCUMENT_TOKEN_TO_BE_REPLACED