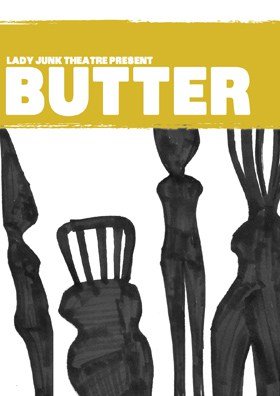 Butter is a challenging, interesting, thought-provoking and somewhat intense production looking at how women look at food. When I read the synopsis on this show I was intrigued. As a woman I knew I would be able to relate to at least some of this show. We all have our own hang-ups and it was refreshing to see a show aimed at all types of women. This production only lasted an hour and merely touched on a number of the issues around women and food. What stood out for me was how real these issues are for every single woman, old and young alike.

There’s a section when a lady called Cath is emailing Gwyneth Paltrow talking about her latest articles on food and healthy living and it really did convey the power of the celebrity. In some instances, the idolisation is enough for you to believe everything they say or do is correct and the products they are endorsing must be the real deal and right for you. Wrong. Every single one of us is different in personality and body type and we all have totally different needs because of that. I loved how they used humour to convey this, and in the end Cath thought for herself.

I must admit when the actors started placing food out I was somewhat scared, I started to wonder if we were to participate and sitting in row one of two may have been a bad idea. Thankfully there was no audience participation. I breathed a sigh of relief, otherwise I may have thrown up as the lunchbox placed in front of me had a cucumber in it, and the smell makes me feel physically sick. I am sure other audience members were thinking good and bad things at the different food choices. A lady a few seats down from me was over the moon that a tub of Ben & Jerrys was placed in front of her. I had an inkling as to where that would go and I was right, the girl that ate most of that was going through a hard time with a boyfriend, although it seemed like a confusing situation. I imagine many people thought of this or have turned to this at their own personal times of need.

It sure was interesting to see all the choices of food and reasons. Although how many people can say they have seen a show and got a slice of pizza although I didn’t manage to bag a slice.

These days our social circles seem to be full of friends, colleagues and – for some – family members promoting Juice Plus or Forever Living. These things are not mentioned in the production but in watching these women it really did make me think some more. Now don’t get me wrong I am not doubting or slating either of these products but what I am questioning is the way these things can affect us. Sometimes telling people too much what they can or can’t eat can also encourage an unhealthy relationship with food. Yes, in life everything is about moderation but no one should feel so upset for eating something that tastes nice and that makes them smile every once in a while.

I think the quote “If it was alcohol, I’d have a problem. I’d have a name. Alcoholic. But there isn’t a name for this.” Really does sum up the show and what the Lady Junk theatre group were trying to convey. I would love to see more from them as I believe women should be focussed on in a much more real way like this. Food is only one subject but as I say the number of humorous stories they had in an hour was immense, the Miranda Hart sounding teacher reading real fairy-tale stories was funny and real, but you wouldn’t honestly ruin fairy-tales for children but they were showing the change in life and how things look to us now, as we have grown up.

If you have never attended the Vault Festival go! It is an interesting building full of lots of choice and good coffee, I would love to see more productions next year.

BUTTER is a humorous and touching play based on the stories of real women, capturing the complex nature of the female relationship with food. The piece stems from recent interviews with women of all ages, a series of workshops with several female actors and the personal experiences of Lady Junk company members. We need food to survive but in modern day it has become so much more than that – BUTTER delves into the joy, sadness, nostalgia, rage and indifference that comes when women and food meet, and raises playful and serious questions about the delight and despair surrounding eating.

BUTTER is a funny, moving and accessible exploration of something so important and present in our culture, and asks the audience to look further than the general umbrella canvas that covers the issues surrounding female body image, and instead go a step beyond and engage with the moment in which so many awful and amazing things can occur for a female – the moment of taking a bite.

A play that reaches the extremes of joy and the depths of sadness, BUTTER is all about food and females, and the love-hate relationship between the two.

Titus Andronicus is not usually a comedy, it is usually a bloody, villainous and vengeful tale, but tonight it is a comedy and a rather amusing one at … END_OF_DOCUMENT_TOKEN_TO_BE_REPLACED

This show is not without clichés - there are three of note in this production. Firstly, the French horn of the show’s title is personified, speaking … END_OF_DOCUMENT_TOKEN_TO_BE_REPLACED

There’s very little in the way of set in this show: aside from chairs, a few crash barriers and at one point, a red carpet, the actors’ movements … END_OF_DOCUMENT_TOKEN_TO_BE_REPLACED

South African born, but raised on the Isle of Man, Pierre Novellie is a true raconteur rather than just another 'stand-up' comedian. He says about his … END_OF_DOCUMENT_TOKEN_TO_BE_REPLACED

This show, Willy Hudson began by saying, is about himself. It is written by himself, is directed by himself and executive produced by himself. Almost … END_OF_DOCUMENT_TOKEN_TO_BE_REPLACED