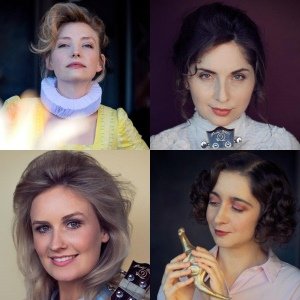 Herstory is a good concept and sits well with the likes of several blockbuster hits celebrating women (Six and Waitress among the newer ones, Mamma Mia! and Wicked among the more established London shows). This is an attempt at an overview of various women that made a success of their lives. As the issue of diversity continues to crop up, with justification, in the entertainment industry, this show makes a point of acknowledging its parameters – put it this way: they weren’t exactly going to talk about Joan Armatrading, Tessa Sanderson or Baroness Lawrence.

For some, this will be something of a stumbling block: there must surely be a way, even if it involves Jersey Boys style stand-and-describe scenes. Another point worth noting is that the audience is informed that creative licence is in use – it’s “a bit inaccurate, but hey” – and the show loses some credibility not so much by not rigidly sticking to the facts of the women included in the narrative in the first place (though there is that) but by not always making it clear what’s embellished and what has been verified by satisfactory evidence. Therefore, one is almost inclined not to believe any of it – except the people characterised in this short play really did exist, and few if any of the details included are completely implausible.

Aurora Richardson, Stefanie Bruckner, Jamie Bell (no, not that one) and Isabelle Woolley are supported by a British Sign Language interpreter, who was rather frustratingly uncredited on the night, and very much involved in proceedings rather than someone standing at the side signing away. Scene changes, of which there are quite a few, are made smoother by having costumes on a rack upstage right and other props close by, such that none of the cast need to go off-stage.

It is entirely possible to do an hour-long show about just one story of the several presented in this production. Indeed, it’s been done – at the 2018 Edinburgh Festival Fringe, for instance, I saw a show called Care Not, Fear Naught, about Irish pirates Anne Bonny (c. 1697-c. 1782) and Mary Read (c. 1685-c. 1721). Here, their lives, as well as the others included, are almost glossed over. As soon as a story is about to really get going, it’s time to, well, get going and move on to someone else. The production is therefore in danger of doing what it appears to have been designed precisely not to do – giving a somewhat rushed and surface-level presentation of these women.

That said, it is entertaining and engaging, and the company harmonise brilliantly in their witty lyrics and tuneful melodies, and there’s some excellent actor-musicianship to enjoy too. A scene about Boudicca wryly notes that while she was leading an army in the days of the Roman Empire, it was only in 2016 that the armed forces in the UK finally permitted women to engage in frontline combat in the service of their country. The inclusion of Empress Elisabeth of Austria (1837-1898) was a curious choice. Talking about someone who (according to the show) was obsessed about her personal appearance and weight as though that is something to be applauded leaves a sour note in an otherwise often amusing show. Either that, or there was a sense of irony in that scene that completely went over my head.

The show is, let’s be fair, never boring. But sometimes less is more, and perhaps an inclusion of fewer stories but covering each in greater depth would result in a less exhausting experience – or otherwise keep the number of narratives the same and stretch to the luxury of a second act. Billed as a work in progress, it’s getting there, and this team could yet pull off something worthwhile.

The Polly Clamorous Collective bring their new, wild and whimsical cabaret back to where it all began – RADA. With a bit of song, a bit of dance and a bit of (adult) puppetry, HERSTORY presents a series of musical portraits telling the tales of some of history’s most enigmatic women, from the Garden of Eden to the deadly Australian outback. With four ukuleles and penchant for dark comedy, Polly Clamorous is here to shake off the dust and puncture some myths in this adequately historically-accurate romp through the ages.

Polly Clamorous is an all-female musical group hailing from Zimbabwe, Australia, Austria and the crummier parts of Essex. Formed in 2016, the group has been gigging around London (Theatre Deli, Brainchild Festival, RADA Festival, Brighton Fringe) and last year took their raucous show Lady and the Cramp to Edinburgh Fringe. Previously known as Thrush Metal, and later the Vulvarines, the company keeps a secret box of racy puns which comes in use every time they have a marketing conflict with big-budget touring musicals.