Home » Reviews » Cabaret » Off The Top! With Jason Kravits and Special Guests 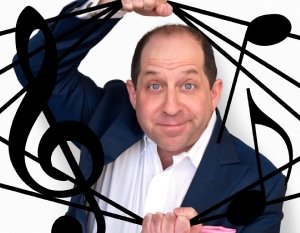 Off The Top! is the title of Jason Kravits’ improvised musical comedy show that’s on this week at Live At Zédel. Kravits is an American performer who’s appeared on Broadway and is a regular guest star on TV in shows such as The Big Bang Theory, The Kominsky Method and The Deuce.

As you take your seat in the superb art deco room that is The Crazy Coqs, there’s a card on your table with various headings such as: Words To Live By, A Place In The World, A Thing, An Adjective, A Short Phrase and The Last Text You Sent Or Received and space to fill in the blanks. These are then collected and provide the basis for the improvised songs Kravits and his three-piece band, John Thorn (piano), Johnny G (bass) and Sophie Alloway (drums) perform during the evening. He’s aided and abetted by a guest star on each of the five nights he’s appearing this week. Last night it was comedian and singer Ruth Bratt and on the other four nights it’s Joe Stilgoe, Sarah-Louise Young, Alan Cox & Stephen Frost and finally Rachel Tucker & Le Gateau Chocolat. Bratt was excellent if somewhat underused and went head to toe with Kravits using her improv experience with Showstoppers to match his machine gun like delivery.

When Bratt comes on stage she asks for the audience to shout out various words and places and Kravits then builds a character and a life story from those random words; last night he was Matthew Discovery from Tulsa, Oklahoma and he was soon off an running as a tennis racquet stringer who didn’t want to work in a wet socks factory and heads out on a bus to the Taj Mahal for a life as an actor aiming for Broadway. Along the way he puts on a failed musical on the streets of Croydon, tells the story of his lifeboat disaster and his love affair with Grimsby! There’s Sondheim and Gershwin pastiches and other musical genres – including a truncated folk song on which Kravits plays a mean guitar.

Kravits is an energetic and engaging performer who thinks on his feet and delivers a superb evening of improvised comedy and songs. Obviously there’s an element of rehearsal and preparation with his band but on the whole you could see and hear Kravits thinking on his feet and I know it was authentic because he used the words on my card in one of his songs!

So, go and see Jason Kravits in Off The Top! If you can. You won’t see the same show I saw as every night is different, but you’ll enjoy the sheer exuberance of a performer at the top of his game, flying by the seat of his pants, in the finest cabaret room in London in one of the best restaurants in town – what’s not to like?

American TV regular and Broadway veteran, Jason Kravits, returns to Crazy Coqs for a star-studded, week-long residency, where he will yet again attempt the daringly impossible (or at least scarily inadvisable) in his critically acclaimed, jaw-dropping, completely improvised solo evening of music and comedy, Off The Top.

The lights come up, the music starts, and Jason walks on stage with… nothing. No script, no songs, no story – and no net! By the evening’s end, he’ll have created an entire life story in song, with every bit of it – every lyric, every melody, every Sondheim standard and eleven o’clock number – made up on the spot. Backed by the most fearless band in the business, and joined by a different celebrity guest each night, Off The Top is one intoxicating cocktail of music, comedy and fun!

Supported by the most daring band in the business, as well as a different celebrity guest every night, Off The Top is an intoxicating cocktail of music, comedy and fun… and it’s never the same show twice!