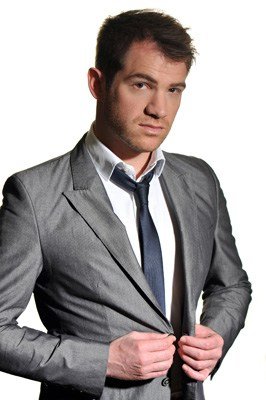 Hello my dear readers. On Sunday evening I was invited to Proud Cabaret to see Daniel Boys (and others) perform at The Follow Spot. Upon entering the venue, I was greeted with recognition from the very friendly door staff. I was then shown to my very own banquette, complete with my name on a sign. It was clear that they knew who I was and so, along with my guest a night of pampering was prepared for. Unfortunately, being Mother’s Day, the absence of a (slightly over) middle aged woman at our table did make us slightly conspicuous!

So, onto the show. For those of you who have read my previous review of The Follow Spot will know that I have nothing but praise for its host, Jess Robinson. Once again, she didn’t disappoint. She wandered amongst the audience with all her usual sparkle and witty badinage. With the “wheel of fortune” type game we were treated to such musical delights as Poker face in the style of Marilyn Monroe, Ace of spades by Shirley Bassey and 500 miles from Katherine Jenkins. Jess is a captivating performer who can work a room to perfection. Unfortunately, as the show is called The Follow Spot, they didn’t have one! This meant that if any of the performers went past a certain point of the stage, they were in darkness. An unfortunate misdemeanour but one that didn’t mar the enjoyment too much.

Next up was the singer, Katie Paine. The woman has a voice that blew the dust off the fake flower arrangement on our table. She gave us a jazz medley that went from Madonna to Judy Garland with ease. She can flow gently from a soft, velvety voice to belting out a big, high kicking number effortlessly.

After a break, in tottered Nancy Spratt who was on the phone to Biggins at the time. Nancy, in her own words is an old hoofer from the dark ages. “ask me who I’ve worked with”…………..”everybody”. She then delivered a set of caustic humour which included another “phone call” to John Barrowman. Stories of the many showbiz friends of Nancy (which sounds like a euphemism but I promise, it wasn’t!) I think she is the only person who, live on stage has the balls to call Barbra Streisand a c…………(I can’t possibly type that word here!) I must say that Nancy bore a striking resemblance to Katie Paine.

Anyhoo, most of you probably came here to read about the main attraction of the evening. Mr Daniel Boys. It has to be said that Mr Boys is a handsome man. The whiff of oestrogen was palpable as he walked on stage and the mothers’ brigade perked up. He gives Tom Jones a run for his money and I was surprised that knickers weren’t being launched at him from all directions. (Steve, my companion wasn’t wearing any but I did hear the phrase “he fills a pair of jeans like wet sand in a stocking”) Quite simply though, the boy can sing. There is absolutely no denying that. However, his choice of material was questionable. At one point, it was as if Disney had sponsored the show. Does everybody have to sing that song from Frozen now? It’s bad enough that all the female artists are doing it but Daniel, No, No, No.

I want to hope that the set was designed to please the particular crowd but the men in the audience looked disenchanted whilst the women lapped it up with their lustful, pre-menopausal stares. They were up dancing and singing and the sound of Osteoporosis ridden bones snapping almost drowned out the music. If there had been many more clichés, I would have reached into my bag for an emergency croissant to bring my blood sugar levels back up. Evidently, Daniel is gifted. He’s got the voice. He’s got the looks. His song choice however belittled his talent.

It is 2002 – another Royal Jubilee year, and HRH (Mary Roscoe) is due to open a new Science wing in a 'sink' comprehensive where Dr Derek Jones … END_OF_DOCUMENT_TOKEN_TO_BE_REPLACED

Dr Anna LaRosa (Dr Stefania Licari) has a lot to say. Just as well, as she’s the only one on stage in this medical comedy, which largely draws its … END_OF_DOCUMENT_TOKEN_TO_BE_REPLACED

Nikhil Parmar’s one-man show, originally written as a TV pilot, manages to touch on a wide range of themes from Islamophobia to modern fatherhood with … END_OF_DOCUMENT_TOKEN_TO_BE_REPLACED

Handel’s 1738 opera Serse (or Xerxes) is an exploration of power, love and human frailty. King Serse falls in love with the voice of his brother … END_OF_DOCUMENT_TOKEN_TO_BE_REPLACED

Lea Salonga has her fans. She also has some superfans, the ones who yell, “I love you Lea!” at almost every opportunity. If that wasn’t enough, there … END_OF_DOCUMENT_TOKEN_TO_BE_REPLACED