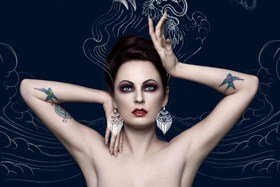 A vintage circus tent on the Southbank is an unusual venue for a show; but then, Nocturne by Black Cat Cabaret is an unusual show. Combining burlesque dance, acrobatics, aerobatics, song and general circus madness, Nocturne takes you on a journey through the convoluted and disturbing dream-scape of a hapless commuter – Ben Cutler, in his BCC debut – who falls asleep just before Waterloo. Once in the arms of Morpheus, or in this case Lili La Scala, queen of the night, he is encouraged to explore his darkest desires and fears; all the little angsts and neuroses which are normally kept stuffed safely down the back of the sofa of the psyche are suddenly made flesh before his very eyes.

And what a lot of flesh there is. Acres of it, spilling out of sheer leotards, sparkling bustiers and tight-tight shorts. But this is no peep show; the inhabitants of this demi-monde are seriously talented. They fly through the air, dangle from chains, swallow fire and contort themselves in ways that make the mind, and the eyes, boggle. That’s not to say that they don’t manage to look sexy while they are doing it, of course. The whole show is redolent of hot, sticky, sensual promise. Freedom is the name of the game; freedom of the body, the spirit and the senses.

There is also a great sense of naughty fun, which is particularly evident when outrageous acrobat Amy G hits the stage in her role as the commuter’s irreverent, drink swilling, roller-blading mother. To appear completely out of control, whilst actually keeping an iron grip on your body and your movements, takes incredible skill. To make people roar with laughter while you are doing it – well, that’s just showing off. There is also a marvellously choreographed comedy fight scene between Ben Cutler and Nathan the acrobat, stuffed to bursting with pop-cultural references which delighted the movie-buffs in the audience.

Director Simon Evans keeps a light but firm grip on the reins, allowing the show to appear as though it is teetering on the brink of chaos, but never allowing it to hurtle down into the chasm of disaster. The whole thing is actually beautifully paced, styled and choreographed, and Lili La Scala is an enchanting and capable compere. Winsome and acerbic by turns, her control over both cast and audience is complete, and her singing voice achingly beautiful.

The score is as eccentric as the performers, swinging erratically between styles and eras without hesitation or embarrassment. It shouldn’t work, it really shouldn’t, but somehow, as with everything else in Nocturne, it does. It adds to the general aura of timelessness, the temporal suspension already suggested by the wildly varying but all equally sumptuous costumes.

Following their sell out run of 2014, London’s finest purveyors of cabaret noir are back this summer with a brand-new extravaganza. The Black Cat Cabaret’s latest production Nocturne, which runs from May to September at London Wonderground, stars the sensational soprano Lili La Scala as an unsleeping queen of the night who guides the audience on a supernatural voyage through a shadowy dream landscape. Along the way there are encounters with showgirl sirens, otherworldly acrobats, shady troubadour tricksters and many other glorious late night eccentrics. Just the kind of company you’d expect from Black Cat’s weird and wonderful world.

With a pedigree unrivalled on the international scene, The Black Cat Cabaret draws together exceptional performers from the worlds of cabaret, burlesque, circus and variety – to create high-end theatrical experiences as diverse as they are decadent. The company won the prestigious “Best Production” prize at London Cabaret Awards 2014 and was shortlisted as “Best Ongoing Production” for 2015. Inspired by dark and daring Parisian cabaret culture, yet ground-breaking in format, BCC events combine the sophisticated and the unexpected, the classic and the contemporary. Though cutting-edge performance doesn’t mean a compromise on quality of experience or production value: this is one cat with impeccable style and taste.

The album for this show, I Could Use A Drink, was released in 2013 but there were nonetheless moments when it felt very much like the show was written … END_OF_DOCUMENT_TOKEN_TO_BE_REPLACED

It’s easy enough to get immersed into a production like this. Even in its concert format, there’s something compelling about the way in which the … END_OF_DOCUMENT_TOKEN_TO_BE_REPLACED

I wouldn’t exactly say Ben Forster appearing as himself in this musical comedy is a career highlight (he is, after all, someone who has played the … END_OF_DOCUMENT_TOKEN_TO_BE_REPLACED

It’s an intricate plot, laced with some subversive humour - that the female character is simply called ‘The Woman’ (Molly Lynch), for instance, is … END_OF_DOCUMENT_TOKEN_TO_BE_REPLACED

Andrea McArdle didn’t, when the 1978 movie Rainbow was released, look or sound like Judy Garland, and she still doesn’t. You’d be forgiven for … END_OF_DOCUMENT_TOKEN_TO_BE_REPLACED