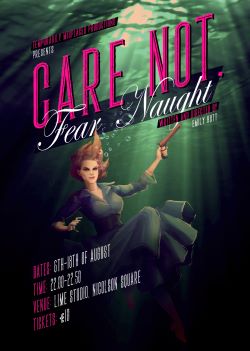 With August approaching fast, Edinburgh Festival previews and small runs are in the hundreds around London. Every director, producer, cast and writer are putting their work to the test to see what else they may need to do before they put their pieces out into the prime fringe theatre hotspot. Temporarily Misplaced Production’s new play finds itself in a stronger position than most before it heads up and showcases a story that’s worth the watch.

Care Not, Fear Naught is a new one-act play focusing on the life of eighteenth-century Irish woman, Anne Bonny. Feeling like she doesn’t belong, Anne joins a Caribbean pirate crew in disguise as she searches for ‘freedom’. This shockingly true story gives the audience an informative recollection on Anne’s life, her experiences, personal connections and struggles along the way.

Anna Herzog portrays our protagonist and addresses our audience from the start of her journey. By her side are two performers who stand by her side and react as her inner thoughts. Through the fights, lies and murders on Anne’s path, Herzog is able to keep an odd likability to her character despite the terrible things she’s done along the way. Herzog’s performance is intriguing and exciting to watch. She also has great chemistry with love interest, Captain Jack Rackham (played by Louis Cummings) who gives an equally strong performance and halfway through the play we are introduced to Mary Read (Jessica Anne) who completes the trio of compelling main characters. A handful of other performers create the ensemble and all individually have their moments to shine as well as playing a multitude of supporting characters.

Hutt’s play is informative and the descriptive detail of the events are well-written but the direction isn’t as consistently up to par, yet. Energy can dip at points and some small lighting, sound or movement changes could very easily sharpen some scene transitions. It can also bring more focus to certain characters during times where others can unintentionally draw your attention. By polishing these small things, the piece will benefit greatly.

Care Not, Fear Naught is a feminist story that rings poignant and will do for years to come. Hutt’s play will considerably be ‘one to see’ for many this August. Temporarily Misplaced has described itself as a platform for new writing, young artists and a voice for minority groups – I believe this piece delivers on that description. It’s a perfect fit for fringe season and hopefully more later on.

Anne Bonny was born in 1801, out of wedlock in Kinsale, Ireland. Within nineteen years would become one of the most infamous pirates to ever sail on the Caribbean Sea. Very little facts remain from her life in what was then the New World – merely tiny dots on a map. Through this play we connect the dots and tell the true story of a woman who lived in a world ruled by men. A woman who chose a path that led her into the heart of the most treacherous trade known; piracy. And she didn’t do it for her sex, she didn’t do it to prove herself to the men of that time, she did it simply because she wanted to.

On board a ship she learns what it is to be a woman, dressed as a man. Working her way up from nothing she fights tooth and nail to make her way from Nassau’s underbelly to a captain’s side. She learns about love, about pain, about fear but most of all about freedom. And she’ll let nothing take it away from her.