Carrying David is a rare beast of a show, written by established playwright Ed Waugh and performed by the intimidatingly versatile actor Micky Cochrane, it tells the story of boxing hero Glenn McCrory, a working-class lad from Stanley, Country Durham who at 24 became the North East’s first world champion. 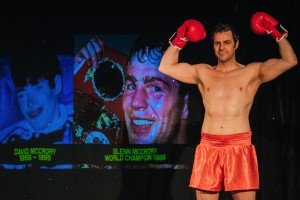 McCrory’s story is one of legend in the North East, his unexpected win punctuating a decade of devastation and dark times for the region. His victory was a beacon of hope for many and this is a story that bears repeating for all its grit and humanity.

It’s a thrilling watch, Russell Floyd’s direction is pitch-perfect, taking us on an emotional and physical journey, keeping everything kinetic and filled with movement throughout. Waugh’s writing, though cleverly structured, never feels like ‘writing’, instead, it’s as though McCrory is in the room with us, sharing his story, and Cochrane is delightfully charismatic and formidable in the role, bringing depth, humility and heart to the part, with a wink of warm Geordie humour and defiance.

It’s been a difficult few years for theatre, and for the production team and creatives on this show, it’s been a ‘journey’ to get Carrying David up and out in theatres. I’m so glad they have, because this is pure, theatrical joy, and judging by the standing ovation audiences are more than ready for this kind of inspiration.

It’s a powerful, emotional, political and personal story that is performed with obvious personal passion by Cochrane. It deserves a full UK tour in filled theatres.

Synopsis, cast & creatives
A compelling story of mental and physical courage, and the love that only brothers can understand. Glenn McCrory’s rise from iron and coal scarred Annfield Plain, County Durham, to become the North East’s only World Boxing Champion, leaps straight from the pages of The Boy’s Own comic. A magnetic, articulate and charismatic character, his story is an inspiration for anyone who aspires to success. But very few know the real truth behind his rise to stardom. Carrying David is a remarkable dramatisation of the McCrory family, as seen through the eyes of Glenn’s foster brother David, severely handicapped with a muscle-wasting disease. Not expected to survive to fourteen, he defied all medical conventions to enjoy life until he died at twenty-nine. Powerless to move or speak through this unforgiving disease, he brought incredible love and joy into the lives of everyone he touched. Glenn and David were spiritually as one and whilst Glenn physically carried him as a young man, it was David’s immense courage, humour and determination to live, that inspired Glen to become World Champion.

The descriptions of what happens in this show are so vivid that paradoxically they leave nothing to the imagination – and, at least at the performance … END_OF_DOCUMENT_TOKEN_TO_BE_REPLACED

As theatre productions go this is a memorable, magical experience filled with heart and love and so many tiny thoughtful details, that I’m not sure a … END_OF_DOCUMENT_TOKEN_TO_BE_REPLACED

There are no props at all in Dog, and yet despite a dog, Roy, being very much a key character, the staging and dialogue are more effective than they … END_OF_DOCUMENT_TOKEN_TO_BE_REPLACED

Be astonishing. That’s Derek Jarman’s exhortation to the world at large and - at the end of the show - to this particular audience. And in this … END_OF_DOCUMENT_TOKEN_TO_BE_REPLACED