I’m starting to wonder if it’s a lockdown thing, as this isn’t the first production I’ve come across recently where the story is about discovery. Not the kind of discovery where someone goes travelling alone in order to clear their minds and hopefully sort their lives out – public health restrictions both here and abroad largely prohibit that in any event. Rather, JoJo (Leon Knights) happens to meet, apparently by chance, Neil (Clive) at a burger joint in Sheffield. They don’t know one another but recognise something of themselves in each other. 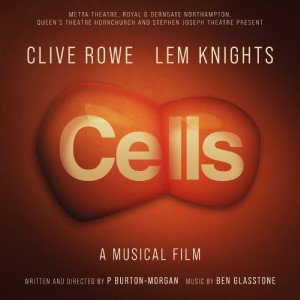 It seems more than a little contrived that they should meet in a world filled with billions of people in the same restaurant. But then perhaps it isn’t if they are two like-minded people with similar food cravings. The show’s title comes from the characters’ occupations: JoJo is starting a biology course at university, while Neil has just been laid off as a lab technician from the very same university. The production does well to put working-class narratives front and centre: a song about hunger, for instance, isn’t so much about drive and personal ambition to fulfil one’s destiny, but rather a physiological feeling of significant discomfort brought about by lack of food because there’s quite literally too much month left at the end of the money.

A fair amount of the story is relatable – it took me a little while to adjust to university life: as JoJo sings, “no one’s malicious, no one’s cruel”, at least relative to the rough and tumble of school life. At 32 minutes long, there is little opportunity for digression, though the show’s ending leaves scope for a continuation of the plot. Quite a lot of ground is covered in a short time. Though some of the lyrics are as repetitive as they are in musicals considerably longer than this one, each song pushes forward the story, and the balance between emphasising certain points and giving the audience fresh detail is practically perfect.

It’s beautifully shot, too, even if there are a few too many close-ups of lips in the opening number, and despite its brevity, the story feels complete. There’s sufficient variation in the musical numbers to allow for a wide range of emotions to be expressed, and the show strikes an appropriately hopeful tone in its key message that in a world where ‘stay safe’ has become a common phrase, there are some risks that are simply worth taking.

Metta Theatre – one of the UK’s leading production companies devoted to British musical theatre – is pleased to announce the premiere of the first episode of the film of a brand-new musical, CELLS, written, developed and recorded entirely during lockdown by the award-winning writer/director P Burton-Morgan and composer Ben Glasstone. CELLS stars Metta’s recently announced Patron, the Olivier award-winning Clive Rowe alongside rising star Lem Knights. The cast album is also available now via Spotify and other digital platforms accessible here.

A university science lab. A kebab shop at 2am. An online gaming forum. Two strangers’ lives become intertwined. Alan Bennett meets The Streets in this tender and uplifting new work, giving voice to the lives of two everyday blokes.

The full film will be available from Monday 26 April and will be free to all to access via YouTube with a suggested donation (£3 per episode, £10 for the whole film) – all of which will go to the three regional theatres to help support their recovery.
https://www.mettatheatre.co.uk/cells

CELLS is written and directed by P Burton-Morgan (Madam Butterfly UK tour, In the Willows, UK tour, Jungle Book UK & International Tour), with music by Ben Glasstone, mixed and mastered by Simon Small and the Musical Director is Phil Cornwell. The Director of Photography is Jon Dickinson, the films are edited by Will Reynolds. Phil Cornwell plays keys and double bass and Curtis Volp is on guitar.

It’s an intricate plot, laced with some subversive humour - that the female character is simply called ‘The Woman’ (Molly Lynch), for instance, is … END_OF_DOCUMENT_TOKEN_TO_BE_REPLACED

Andrea McArdle didn’t, when the 1978 movie Rainbow was released, look or sound like Judy Garland, and she still doesn’t. You’d be forgiven for … END_OF_DOCUMENT_TOKEN_TO_BE_REPLACED

TENNIS ELBOW is the first play that John Byrne has written for thirteen years, and is in fact a companion piece to his critically successful Writer’s … END_OF_DOCUMENT_TOKEN_TO_BE_REPLACED

It’s all a bit banal, really - or perhaps I’m too heavily influenced by some of the other online productions that I’ve seen recently, which deal with … END_OF_DOCUMENT_TOKEN_TO_BE_REPLACED

Mandy Gonzalez is one of those Broadway actresses with a number of dedicated fans and followers, and it’s easy to see why given her sunny disposition … END_OF_DOCUMENT_TOKEN_TO_BE_REPLACED