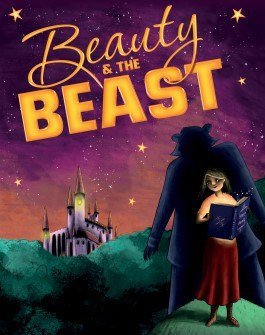 Pantomime is one of those theatrical art forms that you mess with at your peril. Often this is the first introduction to theatre for young people and, when done correctly, can hook them on live theatre forever. The rules for pantomime are simple but set in stone. There is no ‘Fourth Wall’. Children (of all ages) don’t have to sit quietly, they can shout at the stage – in fact it’s encouraged – men play women and vice versa, there are songs and magic and there is a happy ending guaranteed for everybody, except the baddy unless he/she sees the error of their ways. Well, if you go to the end of the Jubilee Line this Christmas you will find that these rules can be successfully tinkered with as The Theatre Royal Stratford East present a new version of “Beauty and the Beast”.

As the theatre filled up, we were introduced to Marcel (Minal Patel), his beautiful daughter, Belle (Helen Aluko) and his sister Aunty Gisele (Michael Bertenshaw). Together, they get the attention of the audience with a rousing sing-a-long before recounting the initial story of the handsome, arrogant Prince spurning a witch and being changed into a hideous Beast forced to remain that way forever unless he can find true love by his 21st Birthday. This introduction was relayed with the use of some really lovely puppets and set the scene for the excitement that was to come. Now, in addition to the traditional story, there is a sub-plot involving a sweet factory running throughout, but I’m not going to say any more about this apart from it leads to one of the most unusual marriage proposals I’ve ever seen in pantomime.

Sticking with tradition, Marcel finds himself in the palace of the Beast (Vlach Ashton) where he is captured by the Beast’s servants (who have all been turned into story-book characters) – Baby Bear (Jorell Coiffic-Kamall), Peter Pan (Amelia Cavallo), Piggy (Ralph Bogard and Pinocchio (Laurence Aldridge). Luckily, Belle comes along and offers to swap places with her father, a plan which the Beast rather sensibly to my mind accepts. Unbeknown to all of the others, there are two more inhabitants in the palace hiding in the Library waiting for the Beast to perish. They are Witchy (Antonia Kemi Coker) and her daughter Prunella (Allyson Ava-Brown). This is the original witch that put the spell on the Prince and time has not been good to her temperament. She wants everything to have a bad ending and will stop at nothing to get her way. Everyone is now assembled in the Palace ready to play out the story in the time honoured way. Well, maybe not. Witchy is evil but fabulous as well. A cross between RuPaul and Grace Jones at her worst, Witchy is a definite force to be reckoned with and even with the efforts of the cast along with the entire audience, she so, so nearly wins in the most unexpected way possible.

In many ways, this is a conventional pantomime but there are some wonderful surprises set up by writer Paul Sirett. The direction by Dawn Reid is sharp and makes fantastic use of the ‘story-book’ themed set by Harriet Barsby. The various songs were delivered with gusto, particularly the Magic Ring Song which is still running round my head.

Helen Aluko’s Belle and Vlach Ashton’s Beast are lovely together and evoke many a happy ‘ahh’ from the audience as they grow to love each other. Michael Bertenshaw is a truly amazing dame with a lovely way of delivering an innuendo to get the adults laughing whilst connecting with children and making them part of the show. He is also really, really good at ad-libbing and I can imagine if he gets that twinkle in his eye then the rest of the cast will have to be on their toes to keep up with him. I also loved the servants, especially Jorell Coiffic-Kamall’s SE London Baby Bear and I get the feeling he was a real favourite with the younger members of the audience with his ‘bruvs’, ‘innits’ and street-wise mannerisms. I can tell you that I really loved every part of the show but you are probably more interested in how the sprogs liked it. Well, the reception was loud and appreciative from every part of the theatre – especially the right hand side which clearly won the singing contest.

Finally, I would like to finish by looking deeply into the story itself. Did the Prince deserve to be punished in this vindictive way for his treatment of a commoner? After all, he was probably brought up secure in the knowledge of his ineffable right to…………… You know what; let’s not bother with the analysing. For once, let’s sit back with the kids, sing and shout along and remember once more what it is to be young and have no worries apart from “can I catch the sweets when they are thrown out to the audience?” and “will the pretty girl marry the handsome prince?” The magic of Christmas at its best.

Beauty & The Beast will run at Theatre Royal Stratford East from Saturday 29 November 2014 to Saturday 17 January 2015. Tickets start from just £6.50 to £26.50, with concessions available on all performances. To book tickets call the Box Office on 020 8534 0310, visit www.stratfordeast.com or book in person at Theatre Royal Stratford East, Gerry Raffles Square, London E15 1BN.

I wouldn’t exactly say Ben Forster appearing as himself in this musical comedy is a career highlight (he is, after all, someone who has played the … END_OF_DOCUMENT_TOKEN_TO_BE_REPLACED

It’s an intricate plot, laced with some subversive humour - that the female character is simply called ‘The Woman’ (Molly Lynch), for instance, is … END_OF_DOCUMENT_TOKEN_TO_BE_REPLACED

Andrea McArdle didn’t, when the 1978 movie Rainbow was released, look or sound like Judy Garland, and she still doesn’t. You’d be forgiven for … END_OF_DOCUMENT_TOKEN_TO_BE_REPLACED

TENNIS ELBOW is the first play that John Byrne has written for thirteen years, and is in fact a companion piece to his critically successful Writer’s … END_OF_DOCUMENT_TOKEN_TO_BE_REPLACED

It’s all a bit banal, really - or perhaps I’m too heavily influenced by some of the other online productions that I’ve seen recently, which deal with … END_OF_DOCUMENT_TOKEN_TO_BE_REPLACED