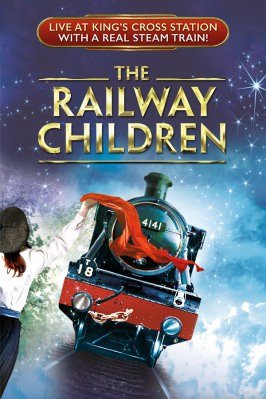 Safe to say this is one of the most well-known and much loved children’s books set in Edwardian England. The 1970 film is iconic, often shown over the Christmas period and enjoyed by all age groups gaining new fans every time it is aired.

I’m one of those people who have watched it over the years and could not imagine how it would be transferred to stage successfully.

On arriving at the purpose-built 1000 seater King’s Cross Theatre, you are greeted by period costumed ushers directing you to the foyer creating a welcoming railway station waiting room environment.

Your ticket informs you whether you are seated on Platform One or Two and as you walk into the theatre you are wished an enjoyable journey which is a lovely touch.

I was seated towards the end of a platform and while there is probably a good view from all seats I would say the perspective of the show could be different depending on which angle you are sat.

Before the show started the atmosphere is set as the cast walk along the platforms interacting with the audience providing an engagement with the characters and surroundings. The whole experience was captivating, transporting you back to a simpler, uncomplicated time or could it be just that at any age you regress to childhood when greeted with comfort and familiar settings? A story with human kindness and decency at its heart.

Written by Mike Kenny and directed by Damian Cruden it was lovely to see that the piece did not detract from the original story, based around the three children’s love for their imprisoned father, hard-working infinitely kind mother and their enforced move to a new home in Yorkshire. The children become fascinated with the nearby railway, waving to the passengers on the daily London bound 9.15 train. Logistically it must be extremely difficult to stage, but clever and innovative use of moving centre platforms pushed by stage hands is seamless throughout, giving everyone in the audience a great view of the ever-changing proceedings. This unique staging is a marvel and award-winning designer (Joanna Scotcher) should be commended.

The proud station master, the likeable Mr Perks (superbly portrayed by Jeremy Swift) kept the children in check. Mother (Caroline Harker) kept the house and family life relatively normal whilst keeping the secret of her husband’s predicament. You really felt the struggles and had empathy with their new situation. Old Man (Moray Treadwell) showed such warmth to his character.

The Railway Children: Bobbie (Serena Manteghi) showed inner strength befitting of the eldest child, Peter (Jack Hardwick) the sole male member of the family, stepped up to the plate and Phyllis (Louise Calf) as the rather whimsical youngest member of the family were all superbly cast. Their facial expressions were wonderful.

The children reminisce of the summer when they became the ‘railway children’ and took you on the journey back through time to their younger days.

The sound was excellent, with lighting and steam effects used well. The vibration felt when the trains were passing was something I’ve never experienced in a show before and added immense enjoyment.

The anticipation of the promised “show-stealing” steam engine did not disappoint on its arrival. This show is simply sweet, wholesome family entertainment which is suitable for any age and is magically charming. The final scenes brought a lump to my throat and was so beautifully executed. It really was a delightful evening’s entertainment.

And the stars of the show? The children or the steam engine? I’ll let you decide.

Tori Scott needs to tell baristas in the sort of coffee shops that write customer names on paper cups in marker pen that it’s Tori With An ‘I’. While … END_OF_DOCUMENT_TOKEN_TO_BE_REPLACED

A child plays with an orange, and the old man works himself into the ground. Playful, rough, intimate and touchingly funny, Home is a piece that will … END_OF_DOCUMENT_TOKEN_TO_BE_REPLACED

Like most people, I think, I often have mixed feelings about a show I see. Occasionally, though it is rare, there will be a production where … END_OF_DOCUMENT_TOKEN_TO_BE_REPLACED