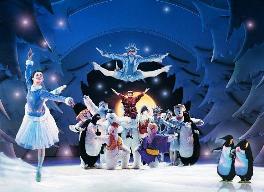 There are certain tell-tale signs that the festive period is upon us. Mince pies in supermarkets in September, emails from various hostelries reminding you to book your company Christmas party, etc. In my case, strange texts from my Mother in early December asking me what size shoes I wear. But whoever you are, a sure way to know the ‘holidays are coming’ is the arrival of superb family entertainment in theatres up and down the country. In London, we are blessed this year with two marvellous Christmas shows. “The Wind in the Willows” (reviewed elsewhere on this site) and, as has happened every year since 1997 “The Snowman” is back at the Peacock Theatre.

The story itself is fairly simple. Just before Christmas, a young boy looks out of his window and sees that it has snowed overnight. He dashes out and plays by himself for a while before finally deciding to build himself a snowman, which he decorates with coal eyes, a green hat and matching scarf. After going to bed that night, the boy wakes up, looks out and sees his snowman come to life. Completely unfazed by this – and who wouldn’t be? – the boy welcomes the snowman into his life, and the two of them have a fantastic night’s adventure, starting with an exploration of the boy’s house followed by a spot of wild animal terrorising with an unattended motorbike and finally a magical trip to the North Pole for a mass snowman party, meeting Father Christmas and stopping Jack Frost from attacking the Ice Princess.

I had seen the show before but there was still this feeling that something marvellous was going to happen as soon as I walked into the auditorium and saw the stage with its simulated snowfall in front of me. As with the book and film, there are no words in the stage production and everything is told via the medium of dance. The music, by composer Howard Blake, is as you remember it but with additional tunes delivered perfectly by the live orchestra. As I said recently, the true mark of a good children’s show is that it is engaging for the ‘sprogs’ and gives the adults some entertainment too. Although aimed at young children, there was a good mix of ages when I went and they were totally enthralled all the way through. Occasionally you could hear a whispered comment such as an awed “look he moved” when the snowman came to life, but when he and the boy took off and flew across the stage, you could hear a pin drop as everyone watched the mesmerising spectacle and heard the glorious “Walking in the Air” – I’m not ashamed to say I may have welled up for a moment at this point as the first act ended.

The second act was a lot of fun and in some ways similar to The Nutcracker. There were individual dances from characters, including a beautiful duet between the Snowman and the Ice Princess. Jack Frost appeared – wearing a magnificent costume and make-up – and played the ‘baddy’ for all he was worth. I have to admit that I thought the inclusion of the triangle between The Snowman, Jack Frost and Ice Princess wasn’t totally necessary to move the story on, though the dancing was really great. Ultimately, as you would expect, Jack learnt the error of his ways.

After receiving a present from Father Christmas, the boy and snowman leave the North Pole and fly back home to an ending that is as inevitable as it is emotionally draining. I’ve never forgiven Raymond Briggs for the ending to the book. I know it had to happen but the final scene in the film always moves me, and that emotion was no less evident during this show, where none of my companions had realised what was happening until it did.

Raymond Briggs original book dates back to 1978 with the animated film first shown in 1982 and nearly 40 years on from its original publication, “The Snowman” is still as marvellous today as it ever was. Robert North’s choreography was beautifully brought to life by Bill Alexander’s direction and the talented cast of the Birmingham Repertory Company. Special praise has to go to The Snowman himself and The Boy who were simply amazing and considering they were on stage for virtually the entire show, completely deserved the massive cheer they received during the curtain call.

Ultimately, this is a show that you can take your kids to see, for which they will thank you in years to come, as they take theirs – simply magic!

The Snowman
A perennial family favourite, The Snowman has transported a generation of children and their families into the wonderful wintery world of a boy and his magical snowman. As a unique friendship is kindled, the two embark on a starry-skied adventure to the North Pole, where they meet Father Christmas and narrowly escape the clutches of Jack Frost.

With music and lyrics by Howard Blake, including the beautiful Walking In The Air, performed by a live band, choreographed by Robert North and directed by Bill Alexander, The Snowman is the perfect Christmas treat for all the family.

The stage show based upon the book by Raymond Briggs and the subsequent film has become a much-loved festive tradition at the Peacock Theatre. Ruari Murchison’s enchanting design combined with Tim Mitchell’s spectacular lighting has been delighting young and old alike for over 15 years at the Peacock Theatre, with its wonderful mix of storytelling, spectacle and magic.

By Arrangement with Snowman Enterprise Limited (A Penguin Company) and Chester Music Limited. The film of The Snowman was directed by Dianne Jackson and produced by John Coates.

I wouldn’t exactly say Ben Forster appearing as himself in this musical comedy is a career highlight (he is, after all, someone who has played the … END_OF_DOCUMENT_TOKEN_TO_BE_REPLACED

It’s an intricate plot, laced with some subversive humour - that the female character is simply called ‘The Woman’ (Molly Lynch), for instance, is … END_OF_DOCUMENT_TOKEN_TO_BE_REPLACED

Andrea McArdle didn’t, when the 1978 movie Rainbow was released, look or sound like Judy Garland, and she still doesn’t. You’d be forgiven for … END_OF_DOCUMENT_TOKEN_TO_BE_REPLACED

TENNIS ELBOW is the first play that John Byrne has written for thirteen years, and is in fact a companion piece to his critically successful Writer’s … END_OF_DOCUMENT_TOKEN_TO_BE_REPLACED

It’s all a bit banal, really - or perhaps I’m too heavily influenced by some of the other online productions that I’ve seen recently, which deal with … END_OF_DOCUMENT_TOKEN_TO_BE_REPLACED