Home » Reviews » Mimi and the Mountain Dragon at The Village Hall, Battersea 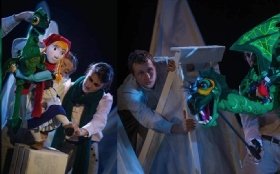 Michael Morpurgo’s Mimi and the Mountain Dragon is a great production. It is described as a family theatre show full of adventure, snow, dragons, lively songs and magical puppets and it is nothing less than that. As we walked into the auditorium we were taken aback by the wintery yet Christmassy setting. There were lots of white sheets, little houses and pretend snow. A beautiful set for the snowy mountains of Switzerland, in Battersea Power Station.

As we settled down in our seats, the children were invited to sit on the rugs creating a very relaxed and chilled -out environment. Great for babies and toddlers who were new to theatre. I wasn’t quite sure if the play had started when the two main characters (William Uden and Michal Horowicz) were chatting away to the children in the audience, they were really personalising the event. There were different conversations going on around the auditorium. The kids were giggling at the silly jokes that they were making.

Then there was an announcement, ‘please switch off your mobile phones’ and with that, I knew the play was going to really start, but I must admit I was already quite amused with the welcoming. Christmas Day had come, the honey cake had been made and bells had to be rung in the Village of Dorta.

Lonely Mimi who yearns for someone to play with finds a lost and frightened dragon. Oh, let the fun begin. We all had to join in and sing songs to help keep the dragons away, then there was pot banging and even fantastic yodelling.

The puppeteering was eloquently done – a joy to watch. The detail in the puppets was quite something, my favorite was the one representing the Mayor of Dorta in his blue cloak, tricorn hat and a chain of office.

The small cast of three were great. Jennifer Byrne took the lead in the yodelling and she did a fantastic job. The charisma and energy between William Uden and Michal Horowicz bought beauty to the role of a loving couple. Their costumes were simple yet perfect for the story. They were exceptional in engaging the audience and making different children around the auditorium feel special. I don’t think any child was left out and after the show, there was an opportunity to meet the dragons and the cast.

Mimi and the Mountain Dragon is an awesome production, one that welcomes very young theatregoers. It is perfect for babies, toddlers and children, with lots of noise, music and engagement. Beautiful storytelling!

A festive story packed full of adventure, snow, and dragons this Christmas join Skewbald Theatre at the iconic Battersea Power Station for lively songs, magical puppets and plenty of audience interaction. Round a campfire sit two storytellers with a thrilling tale to tell, that of Mimi and her Dragon.

High up in the snowy mountains of Switzerland, the villagers of Dorta do everything to keep the fearsome Mountain Dragon away. But this year is different, one snowy morning Mimi discovers something extraordinary – a baby dragon sleeping in her woodshed!