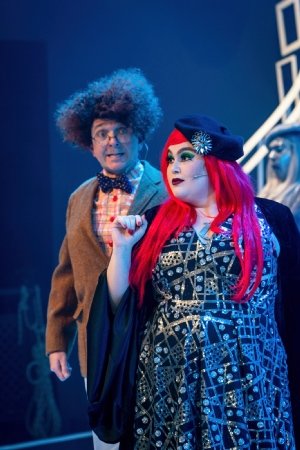 Chickenshed presents Snow White, the most swinging Christmas show around.

This is not the traditional Snow White story as we know it or expect it to be, remember there is no ‘seven dwarfs’ in the title. If you are taking young children, it may be worth just having a quiet word with them, to explain this is a slightly different version of Snow White – although there is a red juicy apple, a mirror on the wall and a stepmother.

The show started with Stepmother Jane de Villiers (Sarah Connolly) seated in her chair, accompanied by her various modern gadgets, including Alexa. She remembered the past and with that, the story began. The costumes were suitably fitting for a Christmassy production. There were glitzy tops, colourful bright yellow tights worn by Snow White and a stepmother who wore her designer silvery sparkling glamourous dress.

The stage set was well designed and complemented the costumes. It could have easily been for a West End production. The lighting and backdrop brought another dimension to the set.

Chickenshed is an inclusive theatre, that provides a safe platform for all abilities to perform and participate in shows – Cara McNanny has a lovely strong singing voice, which easily compensated for any weaker ones. Ashley Driver played the mirror and he did it with such charisma that I watched in awe – Sarah Connolly who played the stepmother played it very well. One could almost feel and see the wickedness in every bone of hers. She did look very mean and horrible! There was a cast of over 200 members, so it is not possible to describe them all, but what I can say is that they brought diversity and excitement to the stage.

A brilliant production, that brought a traditional story to life with a twist. A show not to be missed.

Roll up, roll up for a magical new musical version of a familiar tale – a mammoth production guaranteed to fill the festive period with heart-warming cheer.

Set in a colourful 1960s world where traditional roles are changing fast, what better place for a modern Snow White to ‘find’ herself – in all senses of the word?

An unbelievably huge cast of all ages, a stunning original score and with an upbeat message of how anyone can get to choose the ending of their own story – well, why would you go anywhere else?