Around fifty years ago my mother read a storybook 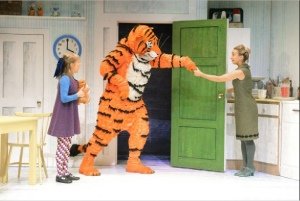 as a child. Twenty years on she had a child of her own and read the same book to him. Fast forward another thirty years or so and that grown-up child sat in the theatre with his mum, watching that very story recreated on the stage.

This year sadly saw the passing of Judith Kerr, the incredible lady behind the story and illustrations of The Tiger Who Came To Tea. Now entering its tenth year as a stage production, this timeless story has always remained a favourite of young children, and has continued to entertain those it has touched for over five decades.

At first glance the set was perfect. Absolutely reminiscent of the pictures from the original storybook; nothing complicated or elaborate, just simple and heart-warmingly familiar. This continued as the characters took to the stage, with the costumes exactly as fans of the book will remember. The show itself has been adapted brilliantly from the original text; very rarely do I recall having seen such a large group of children (as both the stalls and circle were jam-packed) captivated for an extended period of time. The select few songs almost always involved audience participation, another great tool for maintaining the attention of such a young audience. Even the songs that didn’t have us all joining in, were easy to follow and enjoyable; certainly, no mean feat when it comes to children’s theatre!

The actors were all fantastic, particularly David Scotland who took on various roles (including the audience favourite titular role) with each character being starkly and entertainingly different from the last. His facial expressions and physical comedy are worth the ticket price alone, however, with Jocelyn Zackon (Sophie) and Lizzie Dewar (Mummy) by his side, the trio were a joy to watch and complemented each other perfectly. If I had to mention any criticism, perhaps the performer’s microphone volumes could have done with being increased a bit (maybe the tech team had underestimated the raucous enjoyment of hundreds of children a little?!) but aside from that minute issue, I can only shout praise for this show.

From the innovative and magical props and set, to the wonderfully talented cast, this accurate recreation of a treasured children’s book had an audience of children and parents smiling and laughing from start to finish, to say nothing of a man in his thirties and his mum.

The doorbell rings just as Sophie and her mummy are sitting down to tea. Who could it possibly be? What they certainly don’t expect to see at the door is a big, stripy tiger!

A musical play adapted and directed by David Wood, based on the book by Judith Kerr direct from a smash-hit West End season.

Following a smash-hit West End season, the tea-guzzling tiger is back on the road in this delightful family show; packed with oodles of magic, sing-a-long songs and clumsy chaos! A stunning stage adaptation of the classic tale of teatime mayhem . . . expect to be surprised!
https://www.tigerstealive.com/