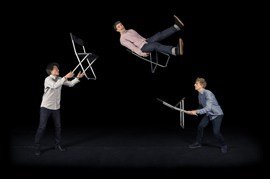 According to Wikipedia, Juggling is a physical skill, performed by a juggler, involving the manipulation of objects for recreation, entertainment, art, or sport. The most recognizable form of juggling is toss juggling. Juggling can be the manipulation of one object or many objects at the same time, using one or many hands. Ok, so that was a very dry description, if you really want to find out what juggling is and how it can be amazingly entertaining, then get yourself along to the Udderbelly Circus Season and spend a happy hour or so watching “Circus Geeks: Beta Testing”

It’s difficult to describe exactly what ‘“Circus Geeks” is about. The three highly personable jugglers – Arron Sparks, Jon Udry and Matt Pang – mix some wonderful feats of juggling with entertaining stories, chat with the audience and interesting facts about the art of juggling. For example, did you know that as an art form, juggling dates back over 4,000 years? Well you do now. Some of the talking provides wonderful insights into the juggling world, in fact the Lexicon section – with descriptions accompanied by a demonstration – is actually quite fascinating and I particularly loved both the ‘Kamikaze’ and ‘French’ methods. In a combination of styles, mixing ‘TED Talks’ with informal chat, the entertainment keeps on flowing.

It isn’t all talk of course, there is a lot of juggling going on – not just with the most common ‘props’ – balls, clubs and rings (as was explained to us by Arron and Jon), but with more unusual items, including at one point a tea-bag, cup and spoon. The three guys work brilliantly both together and separately and really know how to get the audience on their side. In fact there is one segment in the show where Arron is performing solo and is ‘encouraged’ by his colleagues – using a most unusual carrot and stick approach – to make his juggling more difficult, leading many in the audience – myself included – to be in two minds as to whether we wanted him to juggle or drop. I have to say that, from a spectator point of view, either was a very entertaining result. When the three boys work together, it is obvious the amount of work that has gone into making things look simple. Superb timing and the total trust between the performers are evident from the start as they throw things at each other, often without looking. This is especially true in the final two sequences, the first of which combines the mesmerising juggling with a graphical representation of the work being put in. The second uses video along with a large number of dayglow balls to create a stunning visual ending to the show.

“Circus Geeks: Beta Testing” is a wonderful show delivered by consummate professionals at the top the juggling game who grab the audience’s attention from the start and don’t let it go until the final moment of the show. I have to say, I’m not a fan of circuses really but having seen “A Simple Space” and now “Circus Geeks: Beta Testing” I’m starting to come round to them and may have to pop down to the big purple cow once more before this season ends.

Circus Geeks: Beta Testing
Funny, geeky and super smart, Beta Testing lifts the lid on life as a juggler. Ever wondered what goes into being a professional performer, marvelled at how tricks are learnt or wanted an insight into life on the road? Part Hitchhiker’s Guide to the Galaxy, part Bang Goes The Theory, part TED-talk, part Monty Python sketch-show, Beta Testing is a fascinating and hilarious insight into things you never knew you didn’t know.

The performers speak directly to the audience about life as jugglers in this fascinating new take on circus, combining technology with live performance.

I wouldn’t exactly say Ben Forster appearing as himself in this musical comedy is a career highlight (he is, after all, someone who has played the … END_OF_DOCUMENT_TOKEN_TO_BE_REPLACED

It’s an intricate plot, laced with some subversive humour - that the female character is simply called ‘The Woman’ (Molly Lynch), for instance, is … END_OF_DOCUMENT_TOKEN_TO_BE_REPLACED

Andrea McArdle didn’t, when the 1978 movie Rainbow was released, look or sound like Judy Garland, and she still doesn’t. You’d be forgiven for … END_OF_DOCUMENT_TOKEN_TO_BE_REPLACED

TENNIS ELBOW is the first play that John Byrne has written for thirteen years, and is in fact a companion piece to his critically successful Writer’s … END_OF_DOCUMENT_TOKEN_TO_BE_REPLACED

It’s all a bit banal, really - or perhaps I’m too heavily influenced by some of the other online productions that I’ve seen recently, which deal with … END_OF_DOCUMENT_TOKEN_TO_BE_REPLACED