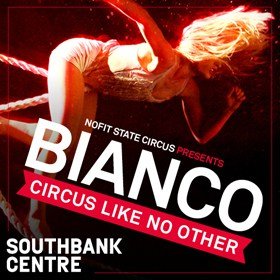 Going to Bianco is like being at a party, where all you have to do is stand around having fun with a drink, watching the beautiful and brave doing risky stunts you don’t have to.

But it’s not a party, it’s a contemporary art circus show in a warm Big Top on the Southbank’s Winter Wonderland site, besides Hungerford Bridge.

The youthful cast of seventeen artists, acrobats, dancers and jugglers, bring an engaging, raw energy to the event. Which is made of separate set pieces, scenes, put together by Director Firenza Guidi, director, to have a subversive, sometimes dark edge, with the intention of suggesting you’ve stumbled upon a welcoming traveller’s camp. A rough and tumble space where anything might happen. An impression reinforced by the show being immersive, performers will be standing about in the crowd, as if they’re just like you, before flying off to the heights of the Big Top on a wire. This is circus – and they’re out to make you part of it.

The show is also described as being promenading but there’s not so much of that, not unless you count wandering around to find a better view or occasionally being ushered out of the way. What you can’t do is sit down (except, perhaps, by special request.) The size of the audience is controlled, however, so it never feels uncomfortable. The space, is such you’ll be able to see enough, even if you occasionally miss some of the cheery scene ground level transitions.

You’re free to move around at will during the performance, to order drinks at the bar inside or to leave the tent to get snacks from the stalls outside, where there are seats .(You’ll be given an access wrist stamp on first entry.) These show dynamics are great for teenagers or anyone else who might prefer not to sit in silence in a red, plush seat to watch a show for a couple of hours.

It’s a miracle of the managed practicalities of the set that moving parts are conjured up to seamlessly disappear again without unduly disturbing the standing audience. The lighting design, by Adam Cobbley, makes the most of the aerial and other perspectives, creating drama and tone.

The theme of the show is Let There Be Dragons. There are supposed to be literary references but on a single viewing, these escaped me. Each scene of the show, there must be about seventeen, though I didn’t count, followed one another without noticeable links. There’s no noticeable narrative. Throughout the show, the emphasis is also on the ensemble having fun together rather than breaking off into romance. This is not contemporary dance. It doesn’t aspire to be Cirque du Soleil with all its whistles and bells, it’s dressed up physicality intended to thrill.

It was marvellous, though, to discover that the aerial performers, poised precariously above us, were being made to rise and fall by the efforts of a counterweight shadow performer, always of the opposite sex, climbing and dropping in opposite tandem. Perhaps representing the ultimate in trust and connection in this risky world.

The music which accompanies the show is played live by an energetic five-piece band, slipping easily between styles, including world, punk, blues, ballads and a capella.

There are many brilliant physical performers, too many to mention. At, more or less, ground level the tightrope walker, Francois Bouvier, was very engaging, the girl managing the glasses and wine bottle was extremely popular with the crowd, as were the amazing hula hoop skills demonstrated. It was, however, when the aerial space was in play the show would stun to dramatic effect.

With performers hanging from cages and ropes, to walk in the air perhaps, twisting to fall certainly. Hair flying, all together or alone.

The final beautiful piece of the evening is performed by Augusts Dakteris. Stripped down, on the ropes, he combines grace, strength, and agility to create perfect shapes in the air with his body. And then it snows.

Marvel at a dramatic live contemporary circus performance from NoFit State.  BIANCO is an immersive promenade show directed by Firenza Guidi. It takes place above, behind and all around a standing audience, with a constantly evolving narrative set to a pounding soundtrack performed by a live band.

Show Opened: 23rd November 2016
Booking Until: 22nd January 2017
Important Info:
Please note that audience members will be on their feet throughout the show and shepherded by stewards during the performance. It is recommended that you dress casually and comfortably, and leave backpacks and large bags at home.
Running time: Two hours and twenty minutes with an interval