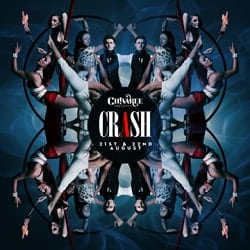 I had the privilege of seeing Chivaree circus earlier this year with their show Becoming Shades at the Vaults festival. Consequently, I had extremely high expectations for their new production Crash at the Cockpit theatre. Without a shadow of a doubt, I can say it exceeded my expectations!

What is love? Ultimately, it’s a rollercoaster ride of emotion. It raises us up to dizzying heights, but the higher you climb the harder you fall – or should I say Crash. Civaree’s newest production has storytelling and human emotion at its heart. It’s engaging, challenging, exciting, and at times, confronting. To put it bluntly, it’s real! There are no conjurer’s tricks or illusions, just tirelessly honed physical skill, underpinned by raw, unadulterated emotion.

The integration of circus and cabaret is perfectly balanced, ensuring that audiences are focused on the story and emotional motivation rather than the spectacle of the stunts. That’s not to say that the physical prowess goes unnoticed or unappreciated but rather that it is so beautifully complemented by the story that it feels part of the greater narrative. The end result is a poignant and awe-inspiring performance.

Our Emcee for the evening, Dusty Limits, is a delight to watch. Indeed, should Kander and Ebb’s Cabaret come to town he would do well to front up for the role of the same name. Walking a fine line between keeping the audience on edge and building a trusted relationship, he brings a wealth of charisma and warmth, offset by a healthy dose of sarcasm and cynicism, finished off with stunning vocals.

Having previously seen Rebecca Rennison perform I had some idea of what to expect, but if possible her passion and intensity were even greater in this production. Unwavering focus and what can only be described as a well-harnessed aggression make it impossible to take your eyes off her… and that’s before you take into account her physical strength and skill with the silks. Again, a flawless integration of physical performance grounded in emotion – a perfect example of why Chivaree consistently produce amazing work!

On the Cyr wheel is Lil Rice who opens the show and sets the bar almost impossibly high for the remaining performers. Her vocal control is astounding, unwavering even when she is upside down and spinning at a disarming rate!

Acrobats Pete and Loric are arguably my favourite act of the production! Their alternative take on Singing in the Rain is a refreshing lift in the mood, after several acts focusing on the downward stretch of the love rollercoaster, but refreshing nostalgia soon turns to wonderment when the two begin their stunts. The synchronicity with which they move and their needlepoint precision leaves audiences awestruck. Despite a slight tumble, their tenacity and focus when re-attempt the stunt demonstrates that these are consummate professionals of the highest degree and If I may say so, to see the results of a minor miscalculation in a stunt such as this further increased my respect for these performers, reminding us of the level of risk; just like love, one mistake can cause a devastating crash.

I cannot recommend this company highly enough and would fully embrace any opportunity I have to enjoy their work. Setting the pace in the London circus scene this is a show that demonstrates Chivaree will not rest on their laurels and will continue to push boundaries in circus and cabaret entertainment.

CRASH is a rollercoaster of feelings, a symphony of colliding bodies. A show that chases moments of emotional intensity, a story about life’s ups and downs, a celebration of strength and fragility. The premiere of CRASH will take place at The Cockpit Theatre as part of the Camden Fringe Monday 21st and Tuesday 22nd August 2017 with further dates to be announced in 2018. Press welcome on either days.

Featuring breath-taking aerial dance, intimate acrobatics, jaw-dropping fire performance, and an array of circus artists of the highest ability CRASH is a raw poetic exploration of human feelings in their purest form.